If you walk along the busy Earlham Road towards the city centre, you cannot fail to notice the grey stone of the Grade 1 Catholic Cathedral, Norwich’s second Cathedral, towering above you. If you are observant you may spot a discreet brown sign, indicating a heritage attraction. Proceed through an open stone gateway, turn left through iron gates and you will suddenly find yourself in a sunken green garden with a Gothic fountain dripping water over blackened flints. Norwich’s secret garden is an enchanted oasis, far removed from the bustle of the dusty street outside.

The plantation garden was created by a successful Norwich furniture maker and Baptist minister, Henry Trevor. Between 1857 and the 1870s he built a house and eclectic garden in a former lime quarry. The garden combined Gothic and Italianate features, created with local flints and ornamental bricks, and an outstanding array of plants. After his retirement Trevor opened his family garden for charity and it became celebrated. The site changed hands many times after his death and the grounds eventually became impenetrable. The garden’s re-discovery and restoration by a dedicated community group forms the second significant chapter of the Plantation Garden’s history. 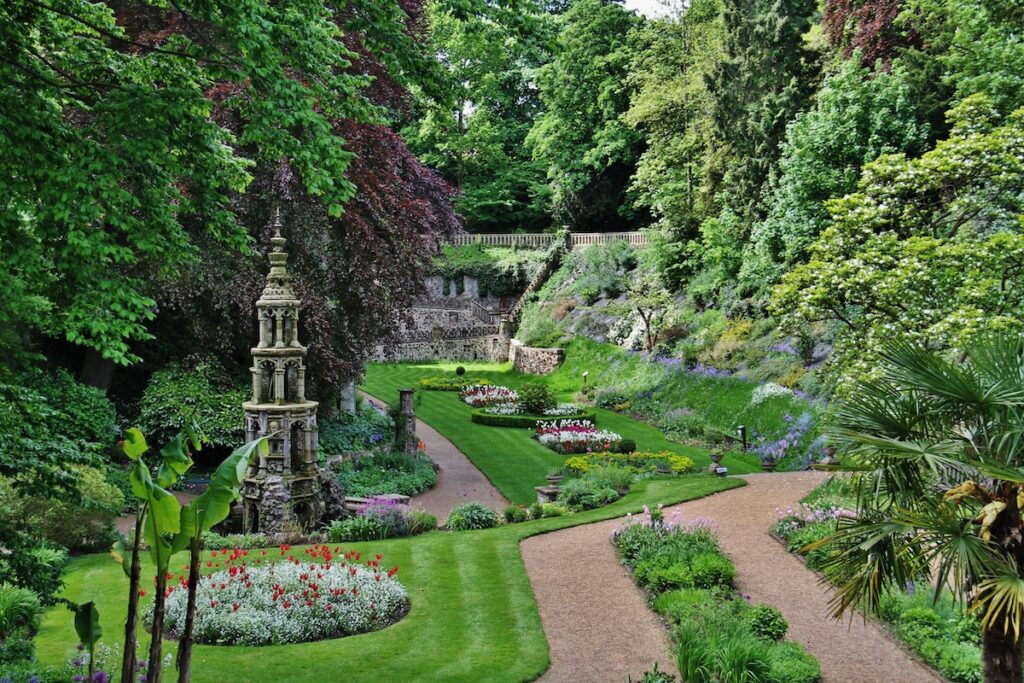 In the 1850s Trevor moved his family outside the city walls to the suburb of Heigham on the western edge of Norwich. In 1855 he took a long lease on a redundant lime quarry and by 1857 an elegant house of classical proportions emerged on level ground to the west of the quarry. His residence completed, Trevor began the formidable task of fabricating a garden in the quarry. 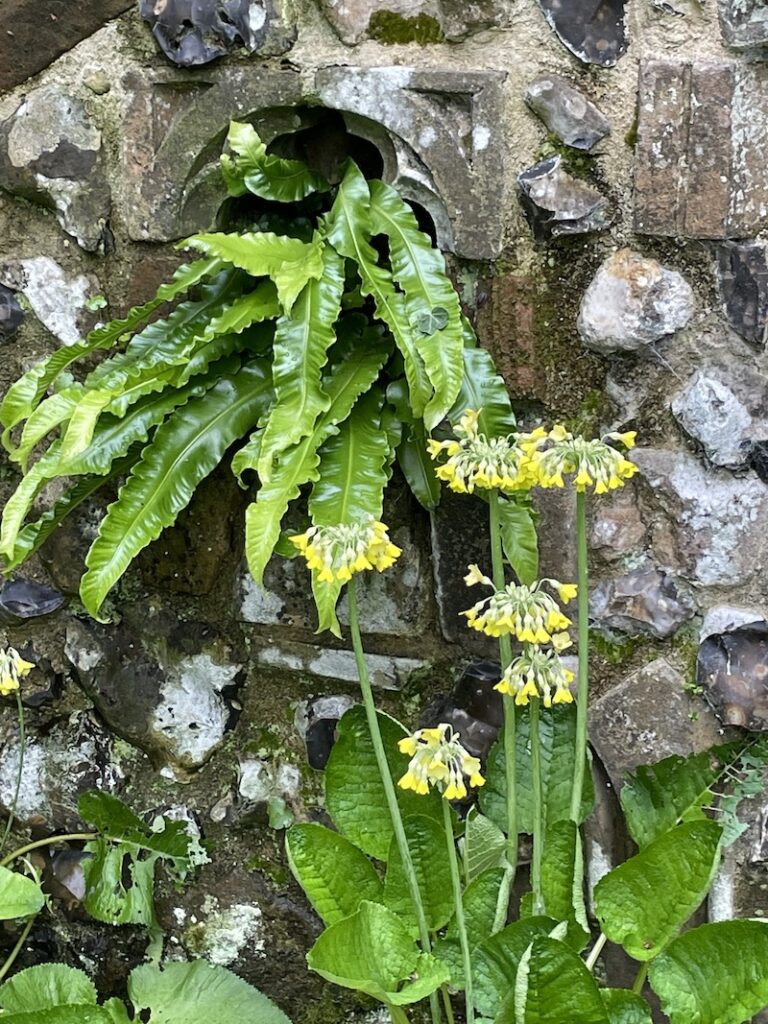 Detail of flints in the Plantation Garden Photo © M Wilson

The fountain was the earliest structure to be completed, crafted largely from ornamental bricks and flints, the latter the indigenous building material of Norfolk. The date 1857 worked into the front of the fountain signals the first stage of Henry Trevor’s journey into garden making. This period was the apogee of gardening journals, targeted at the burgeoning middle-classes. No doubt Henry was inspired both by these and other gardening publications, as well as by other city gardens. Norwich was no stranger to gardening. It boasted the second horticultural society in the country after the RHS. The Norfolk and Norwich Horticultural Society was founded in 1829 and Henry Trevor became an active member.

In this least hospitable of plots, he gradually created the fashionable features of a mid-Victorian garden: picturesque walkways and serpentine promenades, circling the quarry and linked by steps; a rustic bridge spanning almost the width of the garden together with a rus in urbe thatched summerhouse; ornamental rockwork, doubtless planted as a fernery, was constructed on the eastern bank and contained planting basins and water cascades. A folly appeared on the lower lawn and an elaborate stone pilastered propagating house was sited close to the fountain. By the 1870s a grand heated Boulton and Paul palm-house and winter garden dominated the upper lawn. On the outskirts of the quarry glasshouses abounded, an indication of the seriousness with which Henry Trevor invested in garden making. 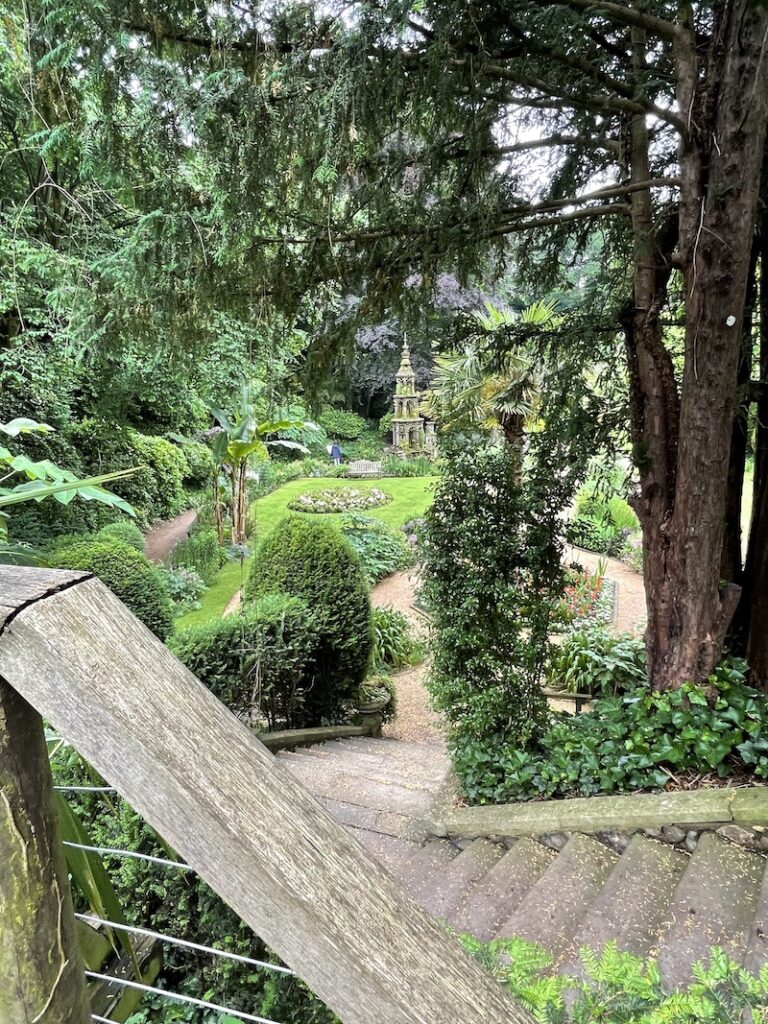 Family and visitors would have entered the quarry garden from the Plantation House via stone steps set alongside an intricate ‘mediaeval’ retaining wall, into which were insinuated various brick and flint artefacts. The most striking design is a cross, unsurprising for a committed cleric. Steps formed a constant theme in this garden: the cynosure was a grand sweep of steps on the steep southern bank forming an elaborate Italianate terrace decorated with Gothic detail. 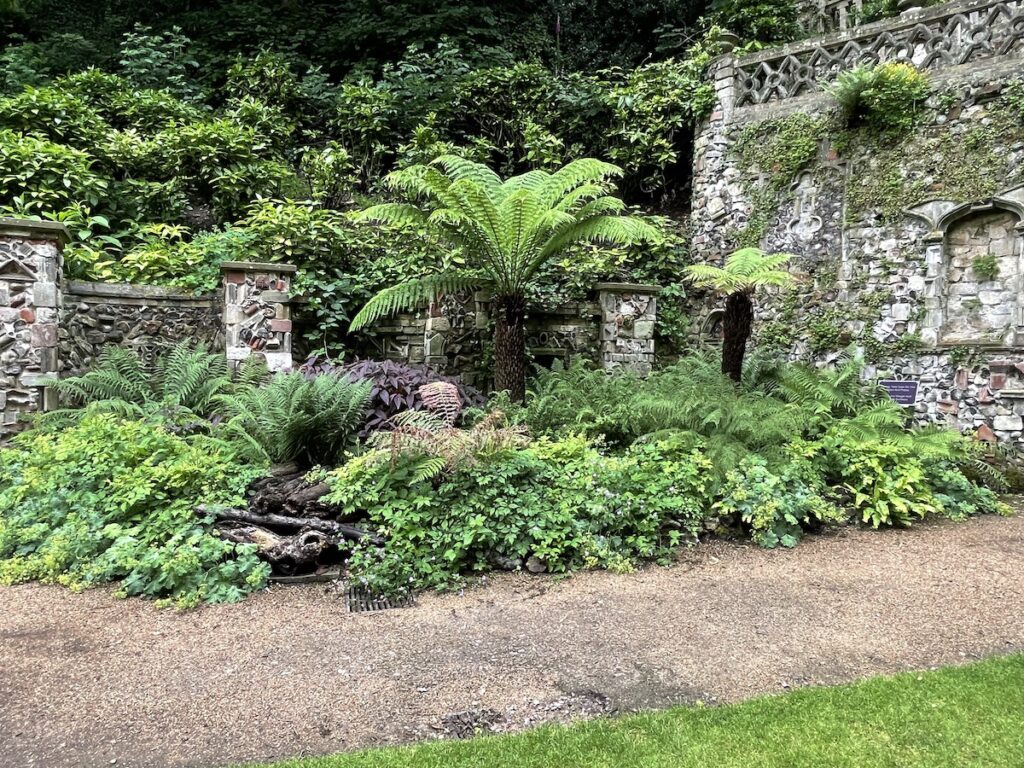 Trees and shrubs burgeoned in this once barren terrain. Elaborate flower beds appeared on the lower lawn, featuring carpet and ribbon bedding. Exotics colonised the palm-house. With its blend of Gothic and Italianate features, the garden became the epitome of eclecticism. Henry Trevor worked with wood and textiles in his furniture business; in the quarry garden the flints and ornamental bricks of the local Gunton brickworks are woven into the structures. After retirement, Henry Trevor began to open his family garden for charity and The Plantation Garden gradually became known to a wider audience and was much celebrated.

After Henry’s death in 1897, the Plantation House and Garden lease was sold to successive tenants. By 1930s the Plantation House had become a private nursing home. After the war, the local Health Authority used the house as a nurses hostel and maternity clinic and the quarry garden became neglected. By the late 1970s a hotel was operating on the site but the grounds had become impenetrable, the garden forgotten or a distant memory. The garden’s re-discovery, reclamation and eventual restoration, from 1980 to the present day, by a dedicated community group forms the second significant chapter of The Plantation Garden’s history. Today this unique garden is open daily upon payment of a small fee into an honesty box and forms one of the city’s foremost and unforgettable attractions.

Dr Cunneen is giving an online talk about The Plantation Garden on Wednesday 22 September.