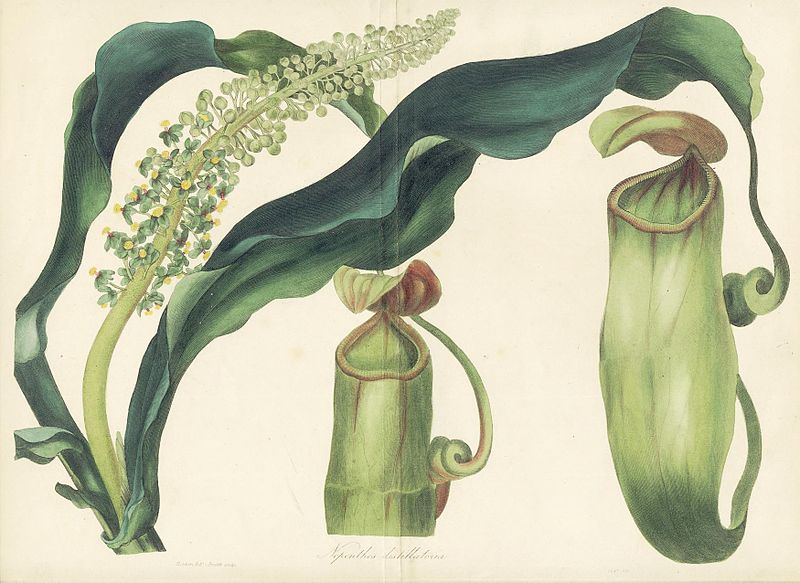 This article about the pitcher plant of Sri Lanka is part of a series to mark South Asian History Month by exploring this year’s theme ‘Journeys Of Empire’ through plant and horticultural history. The tropical pitcher plant Nepenthes distillatoria is only found in Sri Lanka.

The plants were first described by Europeans in 1677 and, for a time, commonly known by the indigenous name Bandura (බාඳුරා in Sinhalese). In 1737 they were reclassified by Linnaeus as Nepenthes, from a term in Greek mythology meaning something that causes people to forget their sorrows.

Colonists saw the plant as an exotic curiosity ideal for display back home, overlooking any practical benefits (the stems have long been used locally as cords and for basket weaving, and the leaves and secretions as ingredients in traditional medicine). They immediately admired the pitchers, but for almost two centuries could not determine their purpose.

Sir Joseph Banks introduced the plant to England in 1789, as a specimen sent to him from Amsterdam. Collected plants soon became coveted specimens in English hothouses. Magazines such as The Gardener extolled how they ‘excite the curiosity of the most careless beholder …[and] above most plants, give character to any collection.’ The famous Veitch nurseries in England and Dublin’s botanic gardens at Glasnevin were soon working out how to propagate plants for sale. Detailed advice was published about their cultivation, taxonomy and propagation at home: the Botanical Magazine of 1828, for instance, included seven pages of description and analysis of the plant according to Western classifications. But the function of the pitchers eluded English botanists: the article states that the pitchers produce a secretion but ‘for what purpose does not appear.’ 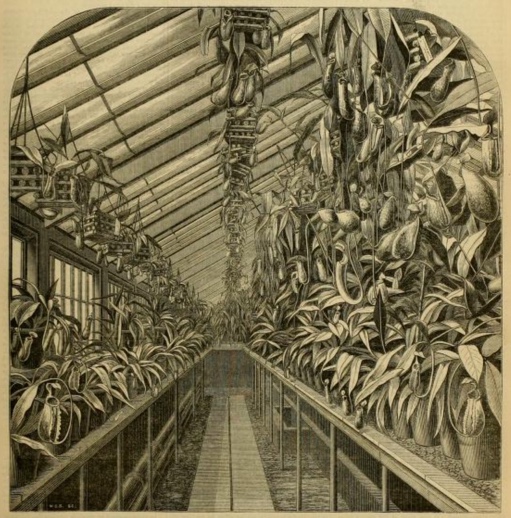 The Veitch Nepenthes House, from the Gardener’s Chronicle, 1872 https://commons.wikimedia.org/wiki/File:Veitch_Nepenthes_house.jpg

Linnaeus apparently believed the pitchers were reservoirs for catching rainwater. A century later, Joseph Paxton was still musing on various theories about the pitchers’ purpose, in his first Magazine of Botany (1834). He observed that some believed them to be nests for shrimps or water reservoirs for animals – and noted that the secretion when boiled had an ‘an odour like baked apples.’ He realised that damage to a pitcher affected the health of the whole plant, and noted that insects were being trapped but ‘whether their death is necessary to the well-being of the plant cannot be decided’.

Joseph Dalton Hooker and Charles Darwin finally established in the mid-1870s that the secretions of some plants, including Nepenthes, were ‘analogous to gastric juice’ and thus the plants could digest and absorb animal matter as nutrition in the same way as animals. 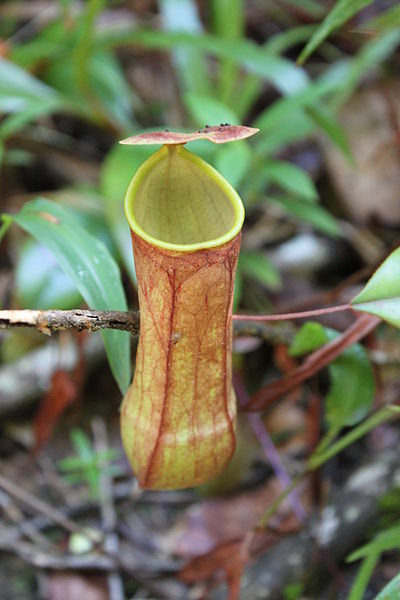 Although Western interest in pitcher plants for display generally fell away after the First World War, it returned in the 1970s and Nepenthes distillatoria is today available for purchase as a house plant.  It is at risk of extinction in the wild.

Other articles in the series: