Journeys of Empire: Meconopsis of Bhutan

To mark South Asian History Month this article about Meconopsis is part of our series exploring this year’s theme ‘Journeys Of Empire’ through plant and horticultural history. 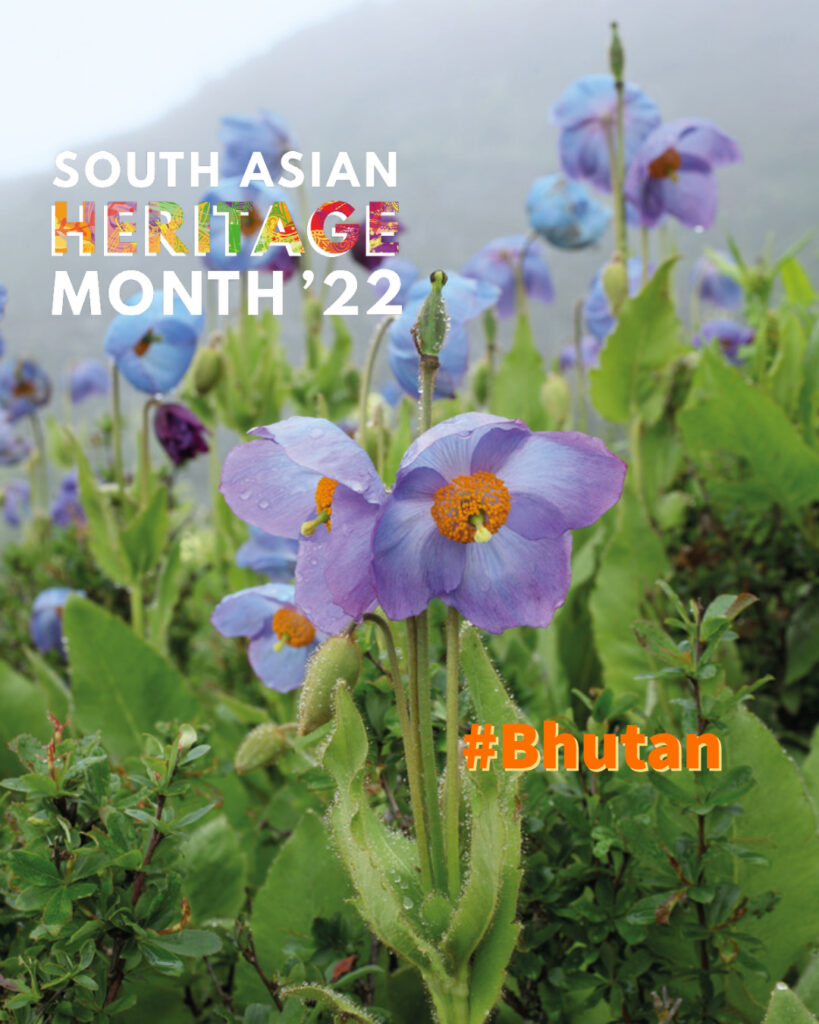 Himalayan blue poppies are some of the most coveted – and most difficult to grow – plants in British gardens. They demand a rich, moist, cool, shaded site and thrive mainly in Scotland and northern England. As the name makes clear, they originate from mountainous regions in Nepal, Bhutan, Tibet and north-eastern India, growing at high altitudes (between 3,000m and 5,500m) in a climate with summer monsoons, intermittent strong sunshine and frequent fog.

One species, Meconopsis gakyidiana, is the national flower of Bhutan. It has 2 to 5 nodding, deeply cupped flowers in a range of possible colours from pale to deep blue, wine-purple and occasionally red. In the UK it flowers from late May. The plant was originally misclassified as a sub-species of M. grandis and has only recently been renamed in honour of its Bhutanese origin: the country aspires to the concept of ‘Gross National Happiness’ – measuring the collective happiness and well-being of its population – and so the local Dzongkha word for happiness (དགའ་སྐྱིད romanised as gakyid) has been used to form the new species epithet.

M. gakyidiana was collected as seeds from the wild in eastern and north-eastern Bhutan and introduced into cultivation in Britain in the 1930s and 40s by the British plant-collecting partnership of Frank Ludlow and George Sherriff. Their friendship with politician Topgye Dorji and his family gave them unrivalled access to the country, and their team included local collectors Danon and Tsonpen, as well as Sherriff’s wife Betty, who is said to have identified the location of a new form of blue poppy in a dream.

Indigenous collectors like Danon were almost always part of Western plant hunting teams. He was a member of the Lepcha people (coming from an area covering parts of Bhutan, Nepal, Tibet and the north-east of India), known for their close connection with local fauna and flora, and sometimes described as ‘born naturalists’. Lepchas were frequently employed by Western plant hunters, including Joseph Hooker in the 19th century. In 1854 Hooker sat for a rather idealised painting with his Lepcha collectors.

These local experts, however, were rarely credited with the collection of specimens; usually they were recorded under the name of the Western leader of the expedition. One exception is Dungboo, a Lepcha collector employed by Sir George King, superintendent of the East India Company’s Botanic Gardens in Calcutta. Dungboo is credited with the first collection of the small blue Meconopsis primulina in 1879and the stunning white M. superba in 1884. The latter is now well-known in British gardens, although it does not seem to have been introduced from Bhutan until the 1920s. Dungboo’srecords for these two species and almost 50 other plants – including primulas, lilies and gentians – collected between 1877 and 1884, are held in the Kew Herbarium.

Where to see Meconopsis

The classification of Meconopsis is complex and uncertain, with some species highly variable in the wild and readily hybridising in gardens. Many of the forms collected in the nineteenth and early twentieth centuries are now rare or lost in cultivation in the UK but good collections of Himalayan poppies can still be seen, for instance at Branklyn Garden in Perth, Dawyck Botanic Garden in the Scottish Borders, Holehird Gardens in the Lake District, RHS Harlow Carr and Sheffield Botanical Gardens in Yorkshire, Ballyrobert Gardens in County Antrim and Bodnant in North Wales.

Postscript: As a result of this article, we were delighted to learn that Dr Charisma Lepcha at Sikkim University is researching the role of Lepcha botanists as a colonial creation, and we will share more about her work when it is published.

‘Some unsung Lepcha collectors’ from the Catching Fliesblog