Wentworth Castle: the Conservatory, another Conference and a Book 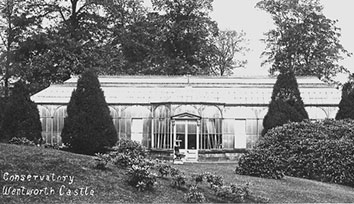 Wentworth Castle: the Conservatory, another Conference and a Book

The extraordinary Georgian palace of Wentworth Castle, Barnsley, is home to the Northern College for Residential Adult Education, while the gardens and park are owned and managed by the Wentworth Castle Heritage Trust, which over the past decade has implemented the rolling programme of restoration.

The Victorian Conservatory is the latest phase and a huge sigh of relief has gone up now that work is well underway to transform the eyesore at the heart of the gardens into the wonder it deserves to be. The project was inaugurated by Prince Charles in January 2012 and, half a year on, the building has been liberated from the engulfing jungle of rampant rhododendrons and the garden terrace revealed. Once all the glass has been removed from the iron framework the structure will be dismantled and transported to the workshop in Barnsley where the sections will be restored. The building will be resurrected on site next spring. When it re-opens later in the summer of 2013 it will also be a delightful venue for weddings and functions. To ensure that guests don’t swoon away in the heat, the plantings will be representative of the temperate rather than tropical climates of the various continents, and a treasured feature will be the Blackamoor statue, which has also been splendidly restored.

The Conservatory as restoration gets underway, August 2012

A 1910 photo by J.Batley showing the conservatory in its full splendour

For an update on the restoration.

The second Wentworth Castle conference, held on 3 to 5 August, 2012, basked in the unusual phenomenon of a sunny weekend, which greatly helped it become another sumptuous triumph. ‘Diplomats, Goldsmiths and Baroque Court Culture: Lord Raby in Berlin and at Wentworth Castle, 1701–39’ was stimulated by the acquisition of Lord Raby’s massive wine cooler by Temple Newsam (Leeds Museums and Galleries) in 2011. Exquisite in craftsmanship and spectacular in scale, this Baroque masterpiece was part of the silver dinner service made in 1705–06 by Philip Rollos for Raby who was Britain’s first ambassador to the Prussian Court in Berlin. It had remained entirely undiscovered until Sotheby’s sale in July 2010, whereupon it was saved for the nation after a temporary Export Licence refusal and an appeal. As the Yorkshire country estate that Lord Raby (later Earl of Strafford) acquired while ambassador, Wentworth Castle was the natural venue for such a conference.

Ten papers by eminent scholars and curators from Britain, the USA, Germany and Holland re-connected the wine cooler to the estate by exploring the political contexts to Lord Raby’s embassies in Berlin and The Hague, as well as the craftsmanship, ritual function and cultural politics of Baroque court silverware in England, Germany and Holland, and the influence of Prussia on the architecture, collections and gardening at Wentworth Castle. Delegates also appreciated tours of the remarkable gardens and park as well as the mansion’s superb interiors, which were once again embellished with a festival of floral displays whose colour, form and scent were such a pleasure. Another exquisite Georgian Dinner was enjoyed within the splendour of the Baroque Great Hall beneath the ceiling decorated with Adrien de Clermont’s singeries. The wine cooler was admired through a visit to Temple Newsam, where the whole house and its collections were opened for the benefit of the delegates, and our buffet supper was followed by an enchanting concert of music composed for Vauxhall Gardens and the London theatres and performed by Ad Hoc Baroque.

The consensual response to the papers was that they must be published to disseminate their new and primary research. This book will be the sequel to the proceedings of the 2010 Wentworth Castle conference whose publication was marked at the book launch generously organised by the Friends of Wentworth Castle Gardens. Set against the backdrop of the political instability generated by the Jacobite attempts to restore the exiled Stuart kings to the British throne, nine chapters, by Tim Richardson, Michael Symes, Carole Fry, Michael Charlesworth, Terry Friedman, Patrick Eyres, George Sheeran, Suzannah Fleming and Jane Furse, explore the symbolic meanings embedded within the country estates of the Tory, Jacobite and dissident Whig landowners who formed the parliamentary opposition to the mainstream Whig governments that managed Britain on behalf of the Hanoverian Kings George I and George II. In addition, Jane Austen’s literary fascination with The Wentworths is discussed by Janine Barchas, and David Lambert considers the post-war context of education and heritage.