Valley of the Water of Leith between Stockbridge and Dean Village 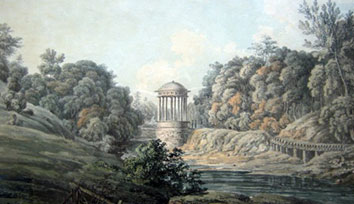 Following up the Public Meeting at Main Assembly Hall, Edinburgh Academy, 42 Henderson Row, Edinburgh EH3 5BL
from 10am to 12 noon, on Saturday 16 March 2013.

The GHS is part of an initiative to:

Lead the renovation of the the Picturesque river valley running through the centre of Edinburgh, created during the Age of Enlightenment, with St Bernard’s Well at its centre. The well was constructed in 1789 to a design by celebrated Edinburgh landscape painter Alexander Nasymth drawing inspiration from the Temple of Vesta at Tivoli in Italy. At the centre of an open pillared dome stands a marble statue of Hygieia, Goddess of Health.

The purpose of this community led initiative is to re-interpret the meaning of the valley and bring it up to a standard of management that would be expected within Edinburgh’s World Heritage site.

The valley has a public linear walkway running alongside the river, part of which was originally a mill lade during the Victorian era. There are remnants of a number of old mills, a sublime cliff, an elevated walkway, lime avenues, water churning over the weirs and Thomas Telford’s engineering masterpiece the Dean Bridge looming over the valley connecting Georgian crescents in the New Town to a later extension of mid 19th century housing further west. Three large private gardens act as an amenity for the public walkway and have in places become sad and gloomy with key views lost. Other land along the river bank is overgrown and in need of clearing back so that the beautiful river can be enjoyed fully.

At the heart of the need to look afresh at the Dean Valley is the lack of a ‘vision’ and a Statement of Significance for the entire valley which is on the Inventory of Designed Landscapes held by Historic Scotland. The present management plan concentrates on Nature Conservation and gives no weight to its status as a designed landscape.

Once the valley’s Significance is established the work of renovation and interpretation can begin.

A meeting of the stakeholders and a public meeting have already taken place and the minutes and notes of these meetings are posted here.

Another T.M. Baynes view showing the Water, and Well, in its greater setting, the Island of Inchkeith in the distance