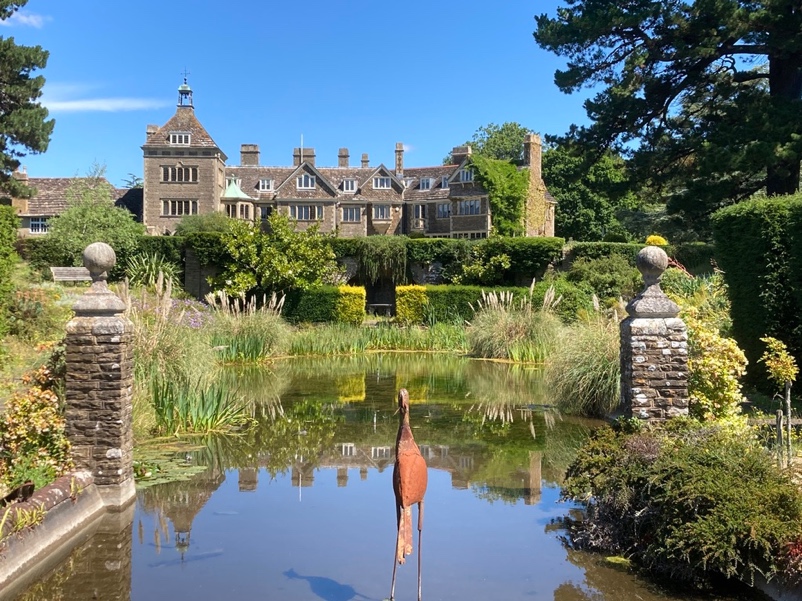 The mansion at Sedgwick Park is listed Grade II and dates from the early seventeenth century, but was remodelled in the eighteenth century. In 1886 it was largely rebuilt to the design of Ernest George and Harold Peto, working in partnership. A tower was added in 1904. The formal gardens lie immediately to the south and east of the house, with the pleasure grounds extending to the north-west in Castle Wood and along Rushett’s Gill to an area known as The Wilderness, situated to the south-west of the house. The garden and park are also listed at Grade II. 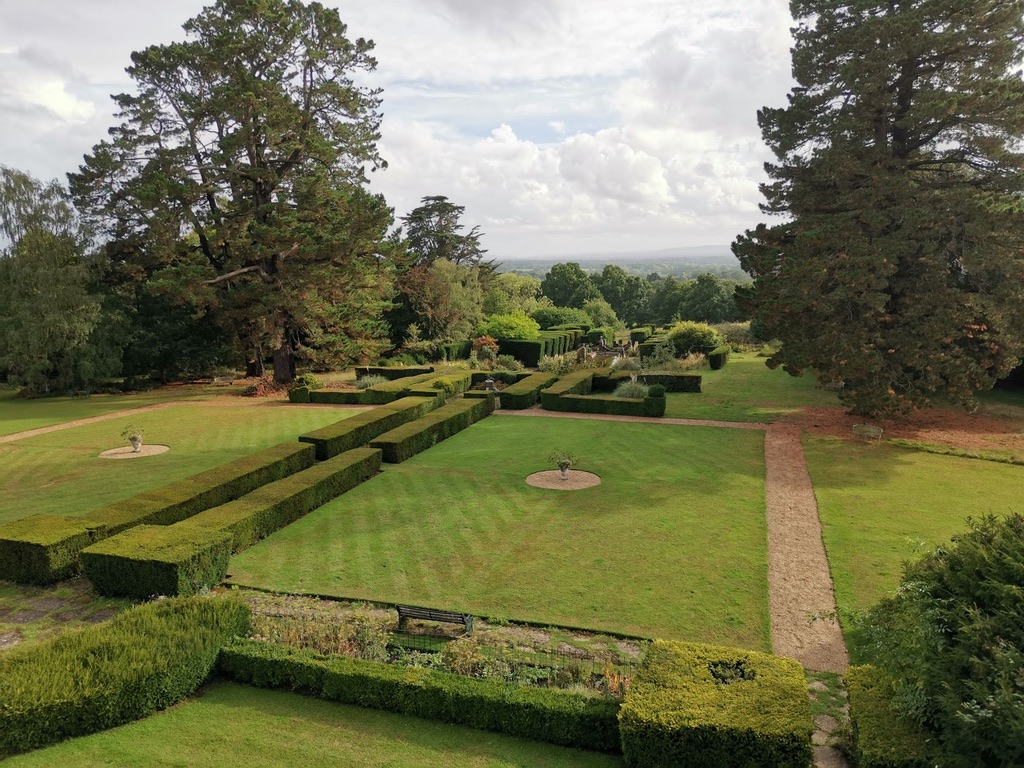 The remarkable nautical theme of the garden at Sedgwick Park creates an unforgettable setting for the house, with its commanding position high on the South Weald. A walk from the terrace, which is paved with Horsham stone, across the main lawn, leads to a bastion, with steps down to a water garden known as The White Sea, framed by buttresses of clipped yew hedging and with extensive views out across open countryside to the distant South Downs.

The extensive parkland was once a medieval deer park within a spur of the St Leonard’s Forest, and the remains of a castle dating back to around 1250 can still be seen to the west of the house. In the seventeenth century Sir John Caryll was the leasehold owner and used some of the castle’s ruined walls as foundations to build a new house known as Sedgwick Lodge.

From 1797 to 1879 the Sedgwick estate was renamed Nuthurst Lodge and the 1841 Tithe map for Nuthurst shows the house and many of the features that can still be seen in the garden today, including a canal to the north and the avenue of trees leading south to The Wilderness. Eventually, after several changes of owners, the house passed to the Henderson family in 1862, and Robert Henderson changed the name back to Sedgwick Park.

When Robert Henderson died in 1871, his son, also Robert, inherited the house and together with his wife, Emma, began modernising and enlarging their home. They employed the successful and fashionable team of architects, Ernest George and Harold Peto in 1886 and the house and garden was featured in books and magazines of the time, including Country Life. It is believed that Peto was the designer of the garden, although no plans are known about, and all of the garden work for which Peto is recognised dates from 1899, the year he moved to Iford Manor and seven years after leaving George. However, we know that Peto was at Sedgwick as he left his initials in the plasterwork of the drawing room: HP 1904.

When her husband died suddenly of a heart attack at the age of 44, and less than ten years after the alterations to the house, Emma Henderson set about re-designing the formal garden with a nautical theme: topiary portholes, a quarterdeck, bulwarks, a masthead and fortifications commanding fine views across the Downs. Mrs Henderson’s children may have given the water garden the rather curious name of the White Sea. 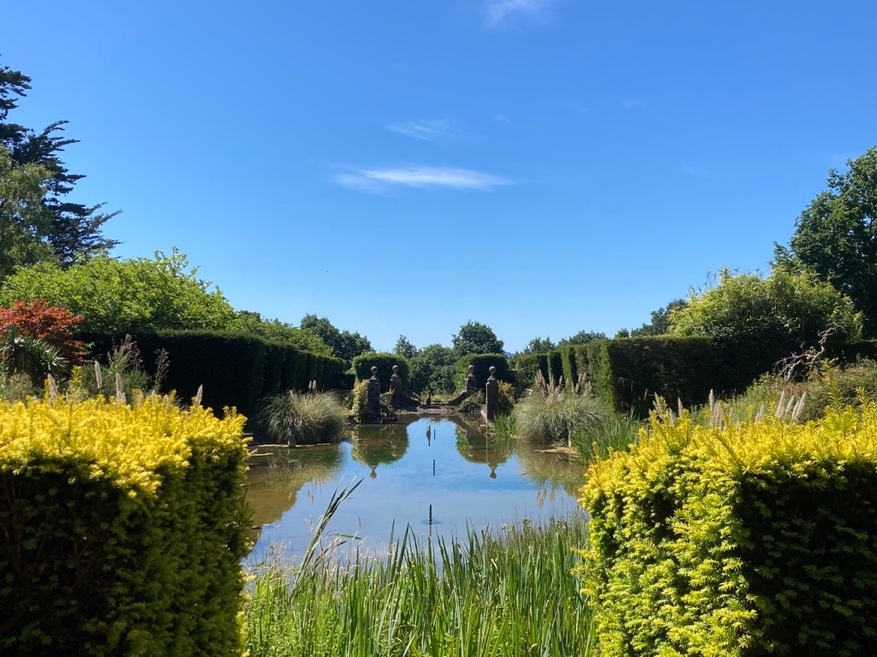 A view of the water garden looking south © Sally Ingram

Country Life visited several times in the early 1900s, with fulsome praise for the garden ‘planned by Mrs Henderson and brought to perfection under her care’ and there is a photograph of Emma standing by the White Sea, which became known as the Lady by the Lake. Emma was a keen traveller, making two visits around the world, and opened her garden to the public on many occasions. When she died aged 80, her obituary in the West Sussex County Times described her as ‘a landscape gardener with few equals’.

In 1951 another keen gardener, the shipping magnate, Lord Rotherwick, acquired Sedgwick Park and created two rose gardens and a series of interlocking ponds to the east of the White Sea. After several more owners the land was split up and the house and garden became neglected until 1996 when an extensive restoration programme began.

When Loyal and Sam, the two young American ‘bicycle boys‘, visited Sedgwick Park on 14 August 1924 Loyal wrote in his diary: ‘The garden is about 50 years old. Its chief interest is the so called water garden or really combination of water and rock garden. It is not large and all enclosed by clipped yew hedges.’ 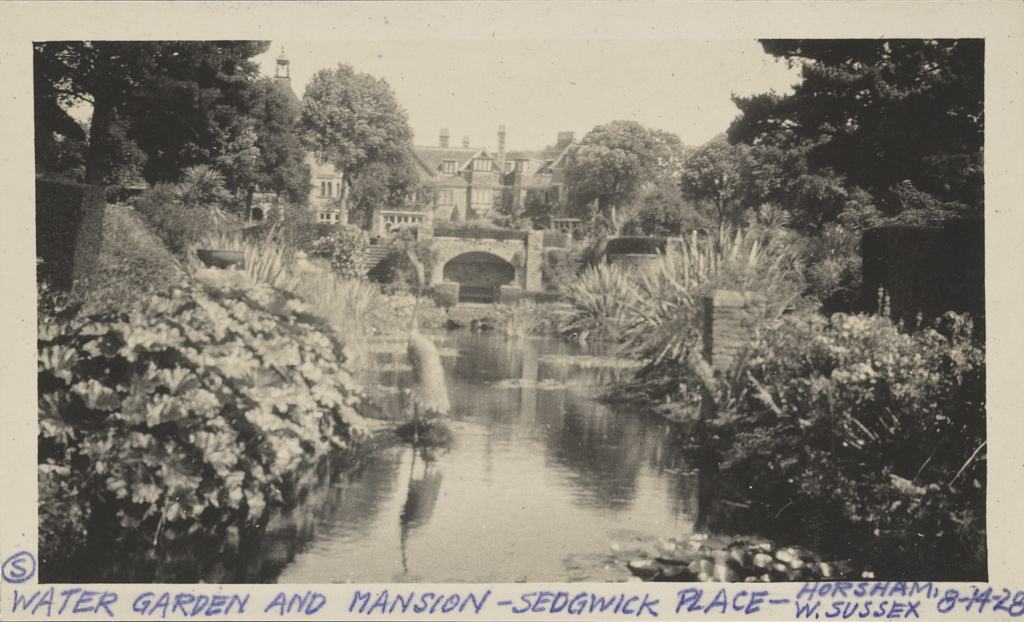 He noted ‘the Japanese features such as lanterns and pagodas together with the water and the great variety and contrast in character of foliage give the garden rather a Japanese aspect.’

It is likely this was the garden that Emma Henderson had created near the western boundary. She may have seen Japanese gardens when travelling around the world, and as Peto had visited Japan in 1898 and admired the style of gardening there, perhaps he had advised on the design. Certainly, the garden was still in good condition when photographed by Christopher Hussey for Country Life in 1942.

While Loyal and Sam waited for the gardener, Mr Muddell, to return from the town and show them the garden, they were nearly eaten by a ‘bunch of cayoudles’. These might have been biting insects, or perhaps were dogs, as a reference found in an online dictionary of Creole gives a definition of ‘kayou’ or kayoud’ as ‘mutt’ or ‘dog’ and it would not have been unusual for estate owners at this time to keep a number of dogs.

A view of the Sedgwick Park water garden in 2022, looking towards the mansion © Sally Ingram

The present owner, Clare Davison, arrived in 2001 with her late husband John, and together they began restoring the garden to its former glory. Rather fortuitously, when Clare first saw Sedgwick, she knew little about gardening and so could not anticipate the scale of what she was taking on, yet clearly a love of the garden developed that has enabled visitors over the years to witness its beauty and historic significance.

When Loyal and Sam visited Sedgwick the head gardener was John Muddell, then in his sixties, having started work as a gardener when he was 16. Research has shown that he was living in one of the cottages on the Sedgwick estate with his wife and son, who was also a gardener. Today the head gardener is Kevin Toms, and remarkably he has maintained the garden largely by himself for many years. It is a creative partnership which combines a keen knowledge of planting, and the formal areas of the garden with Clare’s philosophy of `let it grow’, reflected in the erigeron emerging between the paving stones on the terrace. 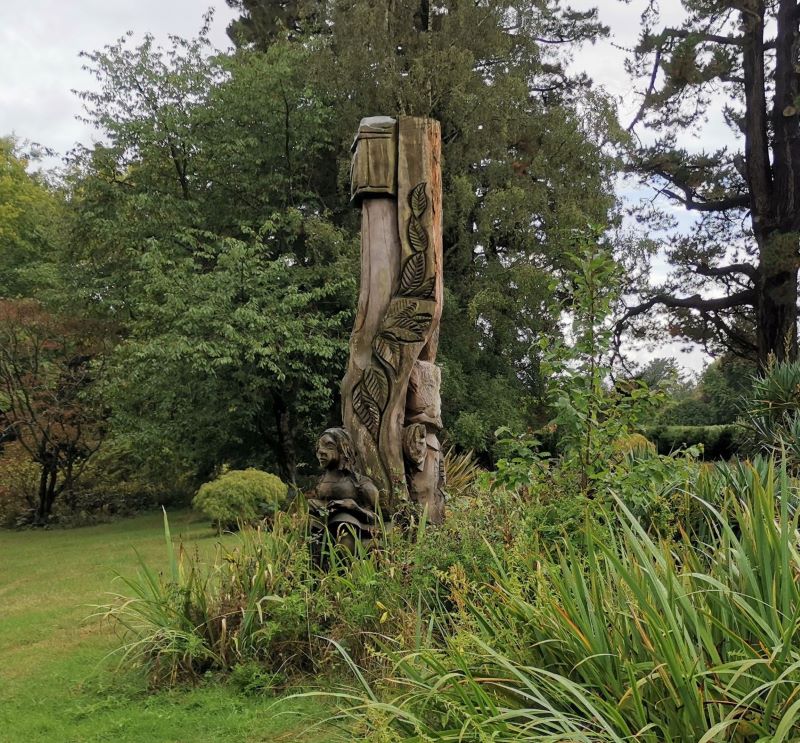 The garden described by Loyal in his diary remains hardly changed, but there is contrast to the historical features, influenced by Clare’s love of design and care for the environment. The colours of the herbaceous borders have evolved over the years. There is a wildflower meadow and a silver birch feature which won silver gilt at the 2010 Hampton Court Palace Flower Show. A turf labyrinth, with an impressive standing stone centre piece, looks out onto one of the finest views of the South Downs. The garden is full of surprise and a sense of fun, with interesting sculptures such as the large totem, carved with characters from Alice in Wonderland. Alice Liddell, the girl who inspired Lewis Carroll’s story of Alice’s Adventures in Wonderland was sister-in-law and friend to Emma Henderson and she spent her honeymoon at Sedgwick in 1880. 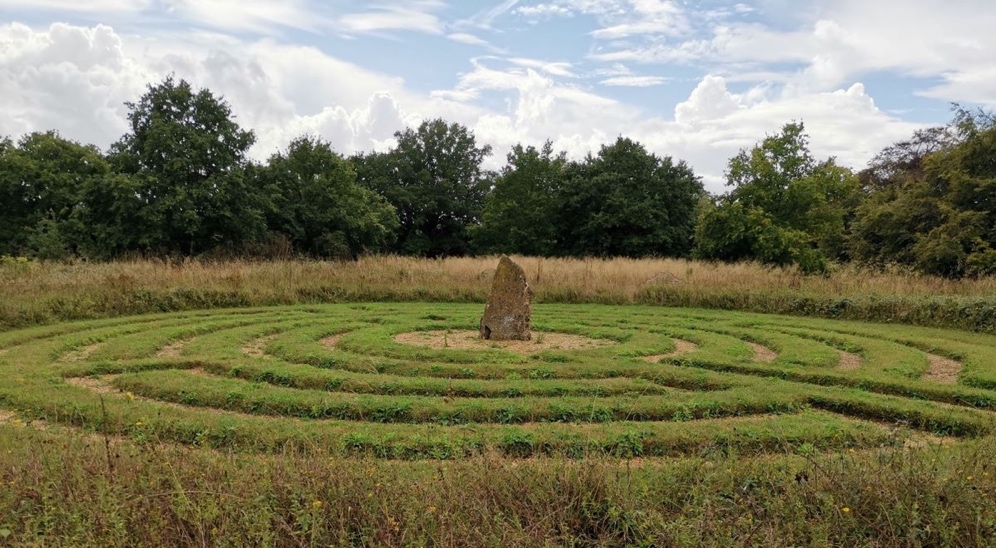 In September the Sussex Gardens Trust held a special afternoon tea party at Sedgwick, uninterrupted by Alice or the Mad Hatter, but to celebrate the visit of the bicycle boys almost a hundred years earlier. This was also a way of saying goodbye, as it would be the last time for a visit to the gardens and the house. Over the years Clare has hosted many events for the local community and has welcomed visits by Sussex Gardens Trust and the National Gardens Scheme. As a long-standing member, the Trust has been made especially welcome, but Clare has decided that it is time to move on. Change always creates uncertainty, especially for historic houses, but there is a proposal for Sedgwick to become a retirement home, with the prospective owners remaining sympathetic to its setting and distinguished history.

With thanks to Clare Davison for her help