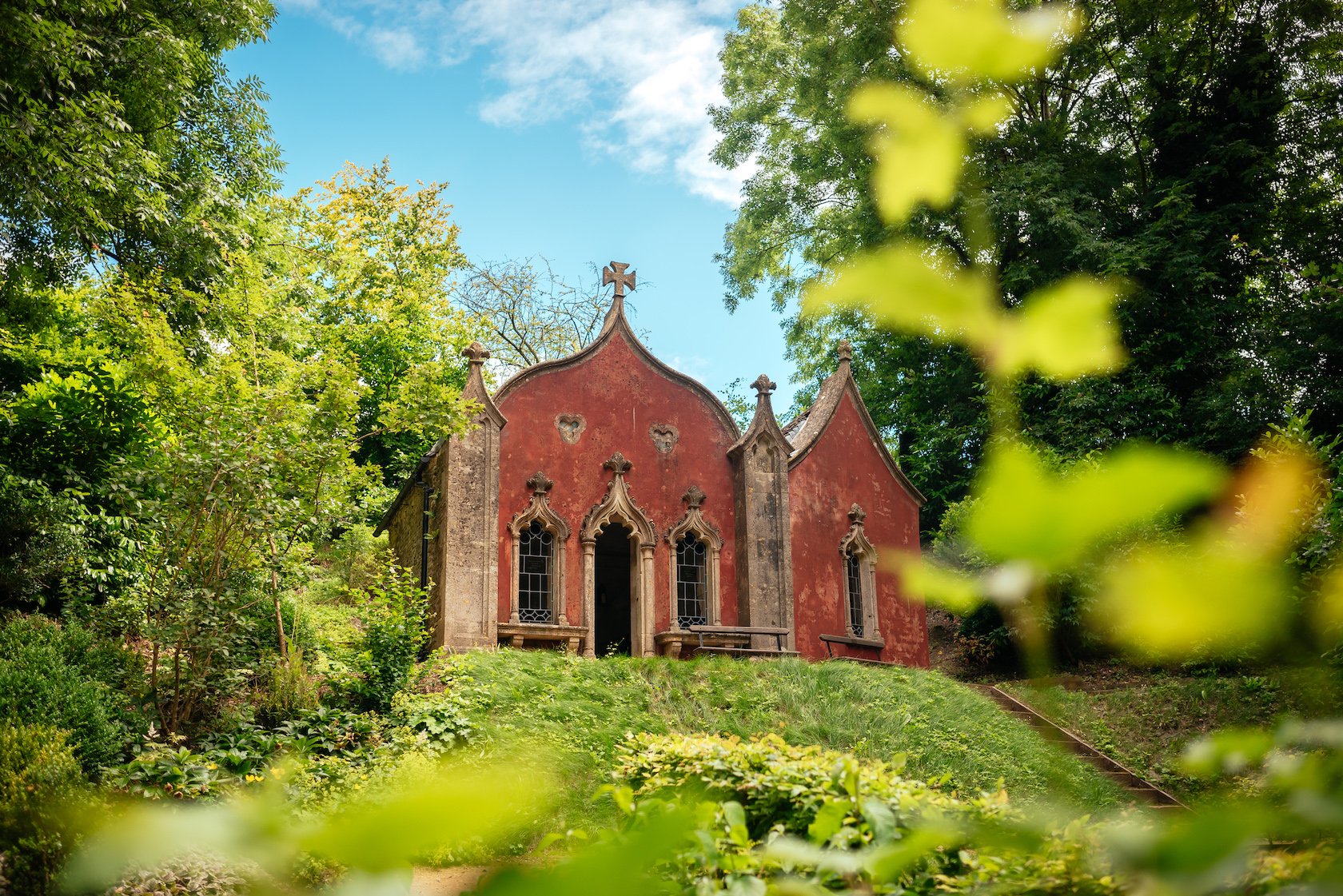 Painswick Rococo Garden is the country’s sole surviving complete rococo garden. It was designed and laid out in the 1740s as a fanciful pleasure garden at Painswick House by Benjamin Hyett, a wealthy Gloucester landowner.  However, fashions moved on and it soon became overgrown and forgotten. It was only in the 1980s that it was rediscovered after historians saw a painting of the house and gardens. After a major restoration, it was opened to the public in 1988.

The beautiful Georgian garden at Painswick featured a fantastical landscape of deceptive vistas, serpentine paths, pools, woodlands, a grand formal vegetable garden and was dotted with follies of different architectural styles. It was a landscape designed for entertaining. 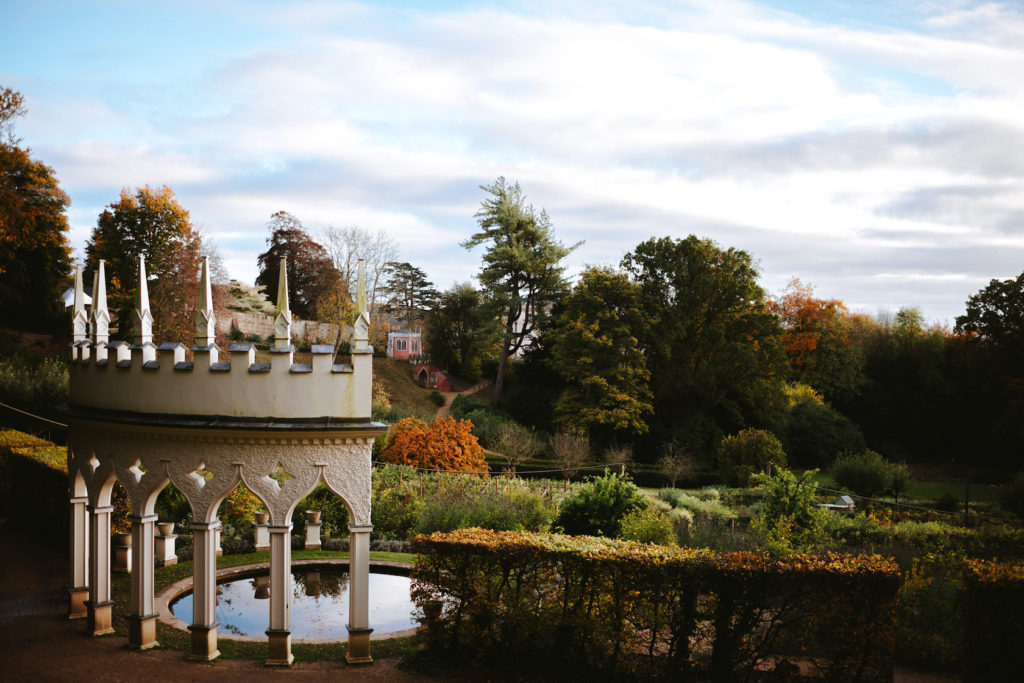 Since its rediscovery it has been restored to its former glory, and is now on the Historic England Register of Parks and Gardens at Grade II*.

In 1738 owner Benjamin Hyett began to lay out the small combe or valley behind his house as a pleasure ground. Paths were laid out along the sides of the valley to form a circuit walk, and springs were used to feed a swimming pool and pond. 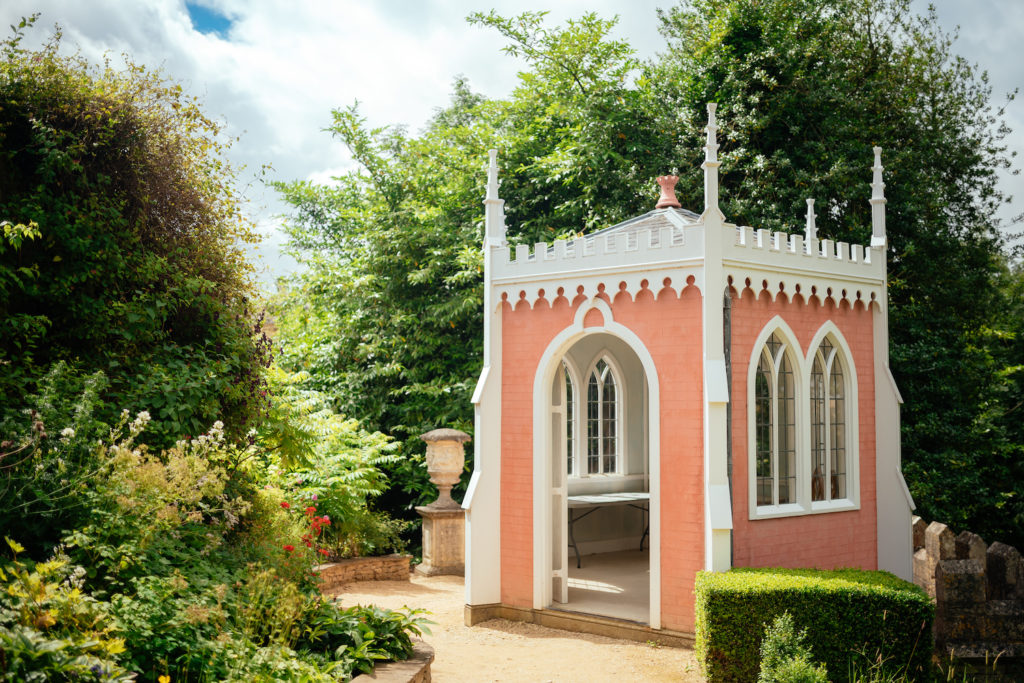 Near the entrance was a gothic summerhouse called the Eagle House (Grade II*),  giving views across the valley to the Doric seat and, originally, to a pedimented arch. Further on through woodland stood the Red House (Grade II*, above left), an elaborate garden pavilion with ogee-headed openings and a fireplace inside.  From the Red House the circuit path led west, curving round to the Exedra, a white-painted wooden screen with gothic arches, surmounted with battlements and pinnacles. In front of the Exedra was a small formal garden with a pool, and a kitchen garden of wedge-shaped beds around a small circular pond.

In 1748 the garden was painted by Thomas Robins and it is thought that the landscape and many of its buildings may have been designed by him. However, there is no proof of this.

When fashions changed the garden became neglected. The estate was much enlarged in the first half of the 19th century by William Henry Hyett, an MP and agricultural scientist, and in 1847 he acquired the freehold of his properties. On his death in 1877 Painswick passed to his son Francis Adams Hyett, whose heiresses made over the estate to their kinsman Lord Dickinson.

In 1984 historians Timothy Mowl and Roger White saw the painting by Thomas Robins of the Rococo Garden in an exhibition of his work. They then wrote an article about it for our journal Garden History. which inspired the owners, Lord and Lady Dickinson, to restore it. The garden had survived relatively well until the mid 20th century when it was planted with conifers. Despite being neglected and overgrown, it was therefore possible to clear the timber and restore the garden.

This initial restoration was based on the 1748 painting and initially focused on re-introducing many of the structures and features that had been lost. These included the Eagle House pavilion, the Exedra and the Kitchen Garden with its natural pools. Buildings that survived, such as the Red House and the Eagle House arch were conserved. The garden is maintained with planting and landscaping that is as close as practicable to the spirit of the Rococo era and is recognisably that of Robins’s painting. 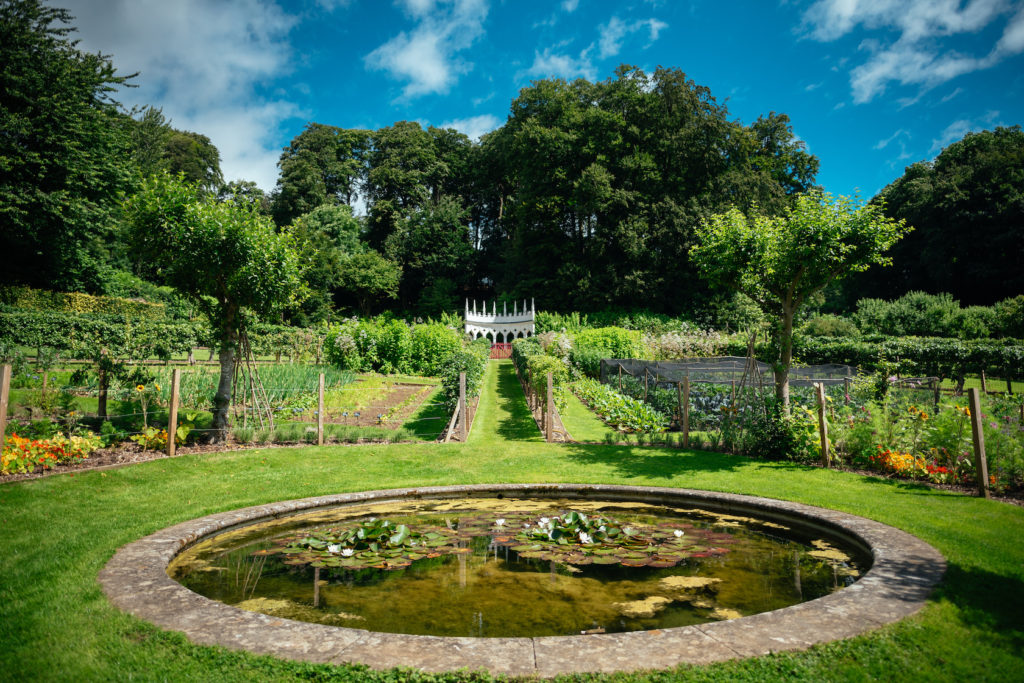 The kitchen garden at Painswick Rococo Garden looking up to the Exedra. Photo © Joab Smith

In 1998 a maze designed by Professor Angela Newling was laid out to the west of the Exedra to mark the 250th anniversary of the painting.

The garden is now cared for by the charitable Painswick Rococo Garden Trust. It is maintained by four permanent gardeners, supported by an expanding team of over 40 volunteers. A new conservation plan has recently been put in place to guide the Trustees and garden staff in their work, and current conservation projects include re-instating a small vineyard on the slope above the Kitchen Garden, as shown in the Robins painting. The gardens attracted over 57,000 visitors in 2019, many coming early in the year to enjoy the carpet of over five million snowdrops, which includes some rare varieties. 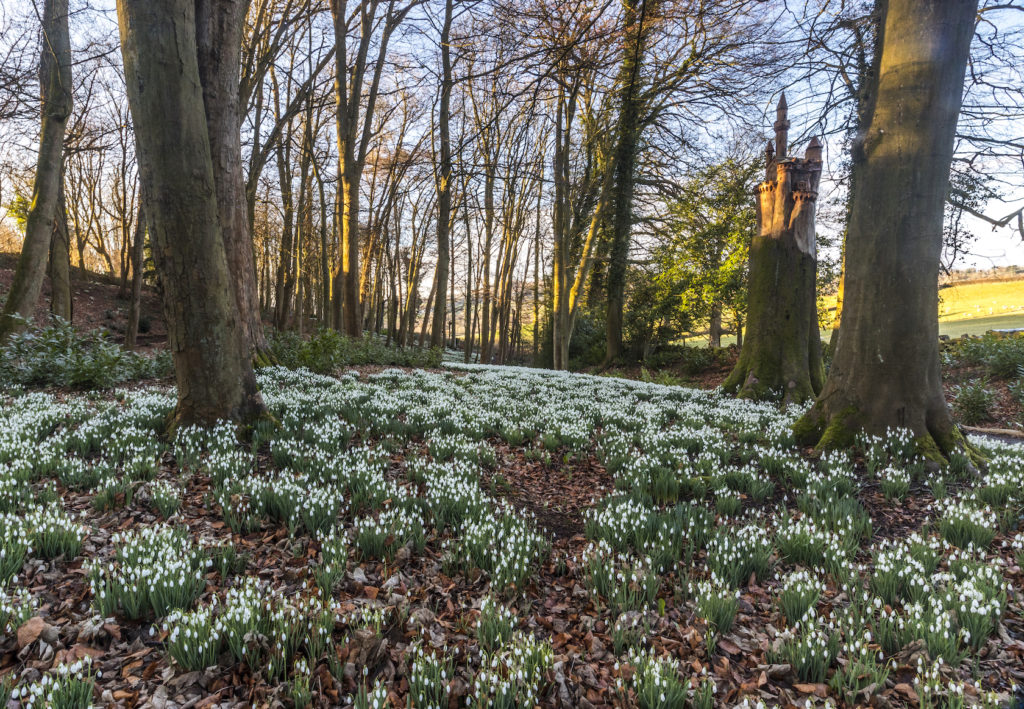 As the restoration of Painswick Rococo Garden in the 1980s began as an entirely private effort, the Dickinsons used existing buildings, and access to the Garden was simply adapted to provide the necessary visitor facilities and a public entrance. For the past 30 years, Painswick Rococo Garden has been kept alive on a piecemeal basis, whilst facing the same issues as many other heritage sites: ongoing overheads, a growing staff team and facilities unable to accommodate increasing numbers of visitors.

The lockdowns of 2020 and 2021 have meant a substantial loss of income to this unique, historic and unforgettable garden. During the recent snowdrop season it was very clear that, despite having to severely restrict the number of visitors, many people really appreciated the value of a visit to this garden and its seasonally changing landscape. One of the most urgent tasks now is to restore the listed Eagle House. Appearances can be deceptive – despite its pink and white confectionary facade, the roof and crenellated woodwork need serious and sensitive work. If you would like to support the garden you can donate here.