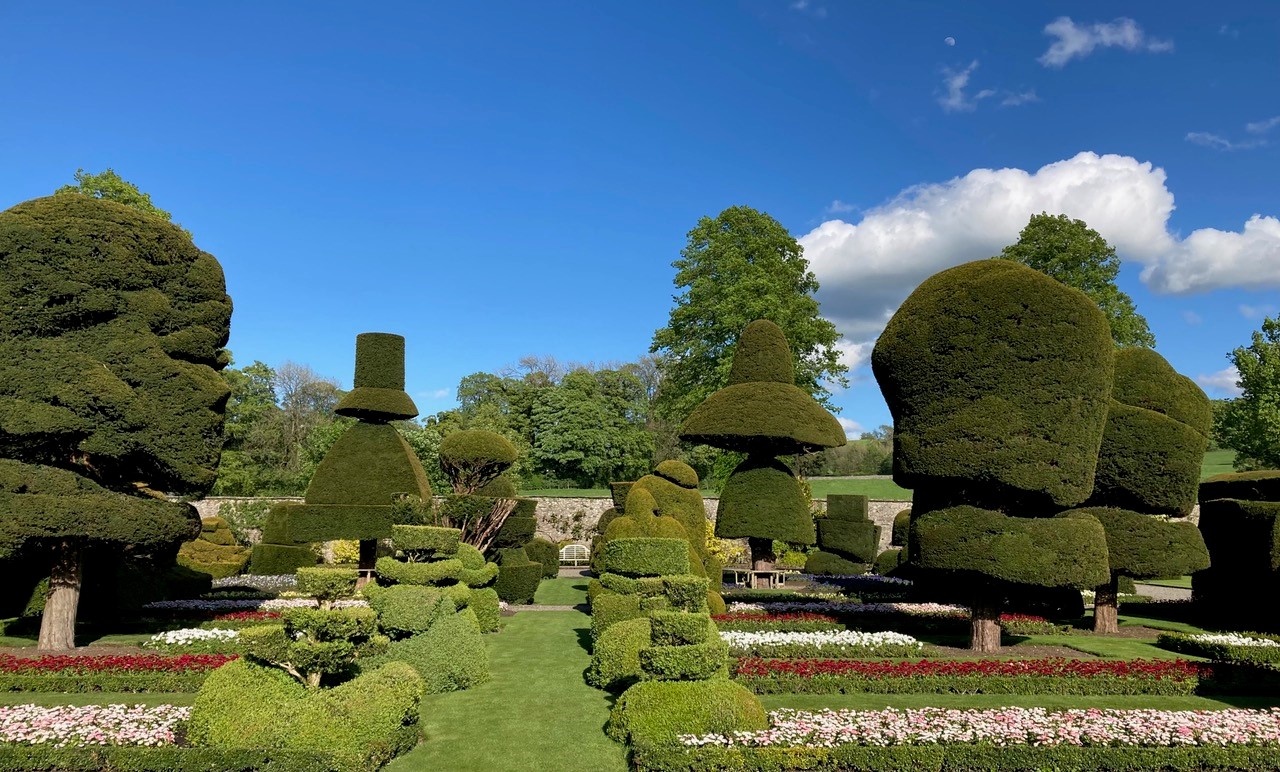 Walk along the path in front of Levens Hall and you will find a small wooden gate leading into the gardens. Hidden behind the high stone wall are ten acres of gardens that are largely unchanged since the seventeenth century. They are most famous for being home to the world’s oldest topiary garden, an extraordinary collection of ancient box and yew trees in abstract or geometric shapes. Other features include magnificent herbaceous borders, a giant beech hedge, a romantic old orchard and the first recorded ha-ha in Britain. The hall and its gardens are both listed at Grade I.

The word ‘unforgettable’ could have been created with Levens Hall in mind, as this is a garden which, once visited, will linger long in the mind. Levens is the finest surviving example of a late seventeenth century topiary garden in the United Kingdom. William and Mary’s Garden at Hampton Court can now only be evoked through historical presentation, but at Levens it is possible to walk into a layout of the same period which remains largely intact.

There is a strong link to Hampton Court, as the gardens at Levens were laid out by Guillaime Beaumont for its owner, Colonel Grahme. Beaumont had worked under Grahme as Supervisor of the Royal Gardens to James II. The Glorious Revolution of 1688 put both of them out of a job. Grahme bought the site at Levens, which lies south-west of Kendal, from the Bellingham family in 1688. The hall, which originated as a pele tower, was altered and refurbished by James Bellingham around 1580. It is the largest Elizabethan house in the county and retains a fine contemporary interior. At the southern end of the stable range is a small house which was built for Guillaume Beaumont and used as the Head Gardener’s residence since that time.

Over time the topiary has developed into incredible shapes, assisted by human ingenuity and fertile imagination. Levens’ head gardener describes the effect in his book The Gardens at Levens as ‘a fantastical gathering of giant green overblown mushrooms, leaning loaves, tall, teetering towers and ballooning bulbous blimps of yew, with smaller, almost human forms and figures in rounded box beneath them, caught, freeze-framed, in an absurd dance, their contorted movement stilled in some surreal Disney or Daliesque scene’. [Crowder, p9] Every year, the mammoth task of clipping and shaping the topiary begins on the 1st of September and continues until Christmas and often beyond. The best time to see it is in the Spring, before the new growth has had a chance to develop. Levens has taken the lead in establishing World Topiary Day, an annual event in May which now includes topiary gardens from all corners of the globe.

Although the garden is famous for its topiary, there is much else to see. One striking feature is the Beech Circle. It lies at the heart of the garden and divides and defines it, forming a hub from which radiate four quartered pathways leading to different parts of the garden. The ancient hedge has spread outwards and upwards to such extent that it is now over five meters, both in height and girth. Other features are the long herbaceous borders, themed in different colours, the rose garden and the fountain garden. Levens also lays claim to the oldest recorded Ha-ha in the country, mentioned in family papers from 1695. It was created by Beaumont in about 1693 to provide a barrier between the gardens and the meadowland beyond leading down to the River Kent.

Visit by the Bicycle Boys 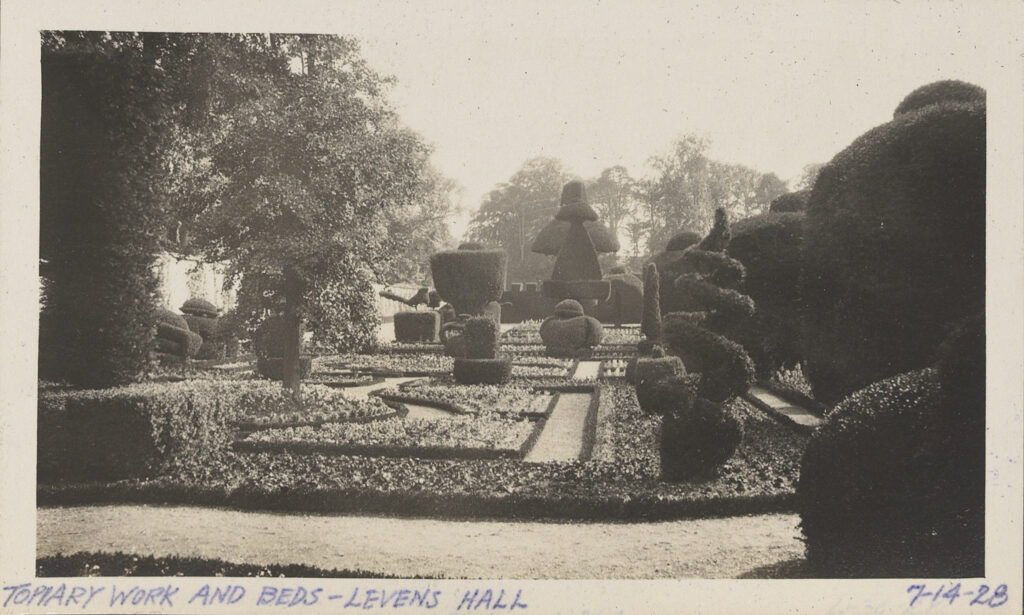 Loyal Johnson visited few gardens in the North of England, but one that he did make a point of seeing was Levens. Loyal and his friend, Sam Brewster, visited on the 14th of July 1928. They had stayed overnight in Carlisle on their way south from Glasgow by train. They had intended to take in Lowther Castle as well as Levens but their plans proved too ambitious, and they had to miss out Lowther. Having changed trains in Oxenholme and Kendal, they arrived at Windermere, and cycled the rest of the way to Levens. Then they headed back to Kendal, hoping to travel on to Sheffield and stay there overnight before visiting Chatsworth. They missed their train and ended up camping out overnight, quite where is not clear from Loyal’s journal.

Loyal took a number of photographs and recorded details of his visit in his notebook. Were he and Sam able to return today, they would have no difficulty recognizing what they saw then. One of the most important characteristics of the gardens is its sense of timeless continuity. The Bagot family, who have owned and cared for Levens since 1885, can trace their ancestry back to Colonel Grahme. Similarly, head gardeners have tended to devote their lifetime’s work to Levens. The head gardener in 1928 was F.C. King. He had been in post since 1919 and was to remain for a further 35 years. Loyal describes in his notes hoping to meet Mr. King, but finding that, because it was a Saturday, he was playing cricket and it was an away fixture. 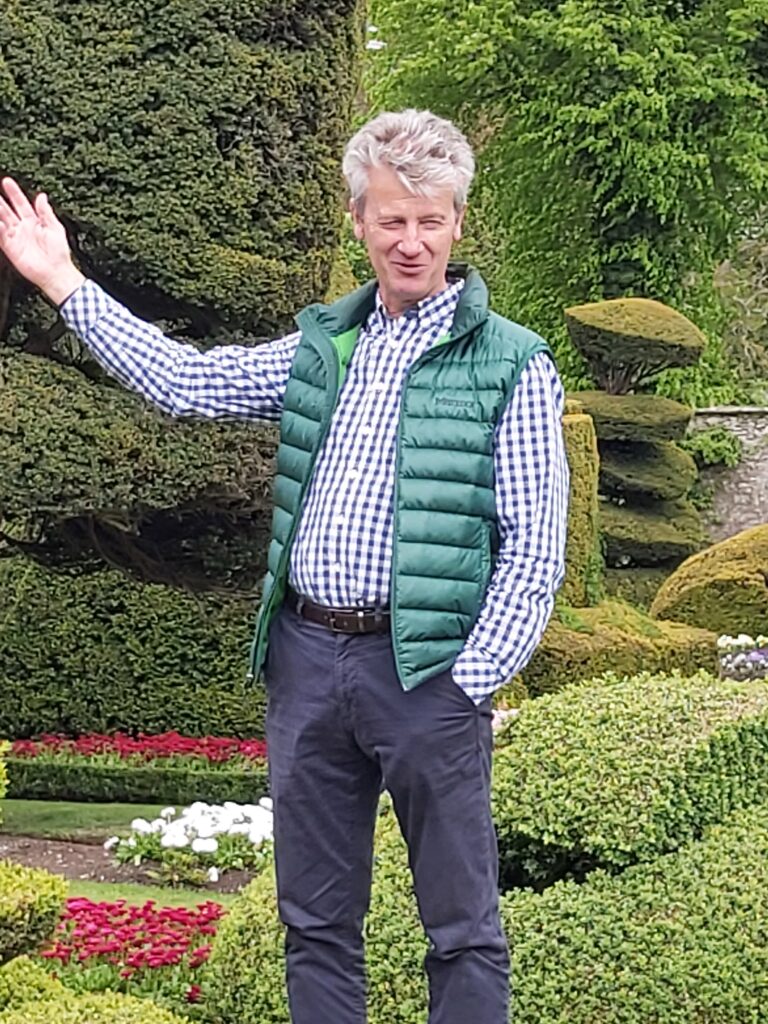 The present head gardener, Chris Crowder, has, similarly, made Levens his life’s work. Appointed some thirty-six years ago in his early twenties, he is still going strong. Perhaps he should not be described so much as a gardener but as a toparius, an ornamental gardener derived from the Latin ‘topia’ meaning ornamental gardening.

Levens is open from April to early October daily except for Fridays and Saturdays. The Hall is also open and is well worth a visit.

Find out more about our Unforgettable Gardens campaign