The Hortus Conclusus at Little Sparta 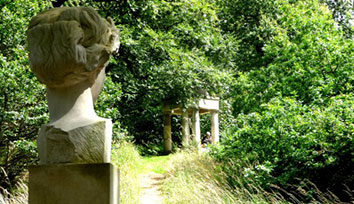 The Hortus Conclusus is the final work conceived by the Scottish poet-gardener, Ian Hamilton Finlay (1925–2006), and it has been realised posthumously. The opening in June 2009 was featured in the Scottish broadsheets, which also reported the £1.2m appeal by the Little Sparta Trust to sustain the garden. Needless to say, the Trust is most appreciative of the generosity that has enabled the garden to flourish so far. Writing in The Scotsman, Richard DeMarco urged the Scottish Parliament to remember that Little Sparta ‘is not a simple garden, it is a Gesamtkunstwerk, a ‘total art work’, rivalling Constantin Brancusi’s sculptural homage to First World War heroes at Targu-Jiu in Romania, or Claude Monet’s garden at Giverny in France. It also brings the same responsibility. He [Finlay] left us a legacy with a double edge: a masterpiece and a terrifying responsibility. Are we up to it?’

The Hortus Conclusus is a version of the mediaeval enclosed garden. As a contemplative haven secluded from the profane world, the Hortus is a fitting culmination of the poetic gardening developed at Little Sparta over forty years. Situated 300 metres up in the Pentland Hills twenty-five miles south-west of Edinburgh, the Finlays had moved there in 1966 when the farmstead was gifted to Sue Finlay by her parents, Simon and Caitriona Macdonald Lockhart. Dedicated gardening prevailed despite the inauspicious terrain at the edge of field and moor. Since 1990 Ralph Irving has assisted Finlay with the gardening, and now continues this herculean task on behalf of the Little Sparta Trust.

The Hortus was created by transforming the derelict barn whose crumbling state had long been a source of concern. Cordoned off with orange tape to ensure the safety of visitors, this part of the garden had resembled a police incident scene rather than a corner of Arcadia. Finlay had initially proposed that the barn should be allowed to decay into a ruin, thus becoming a domestic version of those larger eyecatchers so favoured by 18th-century landscape gardeners. Then in 2005 he announced the Hortus Conclusus at the Trust meeting that, sadly, proved to be the last he was able to attend.

Work began during 2006, shortly after his death. The barn’s roof was removed and the walls lowered and consolidated. The westerly wall is lower to allow the evening sunlight to fill the enclosed garden, and a small wooden seat is optimistically inscribed: The Westering Sun Will Sometimes Reach This Bench. Defined by the interior wall, the two parts of the Hortus embrace earth and sky. One has been planted to evoke mediaeval predecessors; the other contains a circular pool, and the Latin words inscribed around the edge leave no doubt that it is intended to reflect the clouds above: Cirrus • Astrocumulus • Cirrostratus • Cirrocumulus • Stratus • Cumulonimbus • Altostratus • Nimbostratus • Cumulus • Stratocumulus. However, on my recent visit, the clouds watered the garden with torrential rainfall.

The other contains a circular pool (photo by Patrick Eyres)

Sue Finlay’s only account of the hard graft that created the garden can be found in Ian Hamilton Finlay: Selected Landscapes (2007, New Arcadian Journal 61/62). This NAJ also includes a checklist of Finlay’s 78 public works across Europe, the UK and the USA. One of these is at Stockwood Park, Luton, which was opened by Sir Roy Strong in 1991 and from which the bronze head of Aphrodite was stolen in 2000. I’m delighted to report that Luton Museums installed a replica head in 2008, thus restoring one of Finlay’s largest and finest public gardens in Britain.

Another site listed is at Bonnington House to the west of Edinburgh. There, in woodland, three of Finlay’s last works were installed during 2007, including the small Temple of Apollo originally set up at Little Sparta, but ultimately considered inappropriate for the garden there, and so moved to Bonnington, where it sits on Gala Hill, ovelooked by Finlay’s The Xth Muse. Within this modest sculpture park, which intends to encompass both the frivolous and the profound, the Finlays are in the company of contemporaries such as Antony Gormley, Anish Kapoor, Marc Quinn and Cornelia Parker.

This year the Little Sparta Trust published a small handbook as An Introduction to the garden. Written by Jessie Sheeler, this complements her authoritative and accessible book Little Sparta (Frances Lincoln, 2003) which, resplendent with photographs by Andrew Lawson, remains the most thorough record of the garden. John Dixon Hunt has also made a welcome contribution to Finlay’s bibliography with Nature Over Again: The Garden Art of Ian Hamilton Finlay (Reaktion Books, 2008).