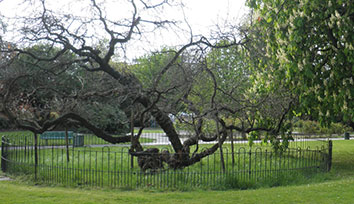 report on the Study Day by Judy Tarling

The crowded lecture room at the Linnean Society on a gloomy Wednesday morning was ample proof of the lasting legacy of John Evelyn’s life and work. The joint day arranged by the GHS and London Parks and Gardens Trust brought together leading authorities on the many and varied aspects of Evelyn’s work and times, at a time when the site of his former home and garden as well as the adjacent Royal Naval Dockyard at Deptford, are threatened by a massive new development.

With Evelyn’s biographer Gillian Darley in the chair, we were introduced to the man and his work, our appetites whetted for the visit to Sayes Court to take place later in the day. Mark Laird then gave us an inspiring pre-recorded ‘world view’ of Evelyn, his message seeming to gain power by its very disembodiment. Jan Woudstra then laid out the garden for us and brought the trees and French-inspired design before our eyes. Frances Harris impressed us with the importance of the Evelyn archive and how the collection informed us of the many aspects of his life. Michael Hunter described Evelyn’s role in the establishment and work of the Royal Society. Several speakers acknowledged the work of Pru Leith-Ross, who many there were delighted to see in the audience.

Roo Angell and Bob Bagley then led us forward from Evelyn’s time through the next two centuries with a history of the site, and the proposal of a ‘National Trust’ establishment by Evelyn’s heirs, although this was not to be. By the time Roo and Bob had sat down, we had been drawn into their crusade to re-establish an Evelyn presence at the Sayes Court site, now subject to re-development. Their passion and persuasiveness could hardly fail to convince the most hardened developer, and progress had already been made in establishing the importance of incorporating a tribute of some sort in the plans. Finally a view of methods and approaches for dealing with situations such as these were described by Jonathan Lovie, GHS Conservation Officer and Policy Advisor.

The Peter the Great Mulberry, in Sayes Court Garden

Ably herded by Robert Peel, the party then reassembled on Embankment Pier and sped to Greenwich, catching a view of the Sayes Court site from the river in passing. At Deptford, we were led into the small remaining piece of the garden, now a public park, the centrepiece a mulberry tree allegedly planted by The Great Sayes Court Hedge Wrecker, Peter. Then we were led along the road to gaze through some modern iron gates into a concrete wasteland, the proposed development site itself.

In a packed room at the 17th-century Master Shipwright’s House, Deptford, Tim Richardson summed up the day and invited ideas concerning the form Evelyn’s garden tribute might take. Bob Bagley described his vision of a craft training centre and workshop for the modern aspiring Grinling Gibbons. Whatever the future for this project, the passion and enthusiasm shown by this day should give hope for establishing a must-visit destination site not only for garden historians, but historians of music, science, air pollution, the river Thames, as well as many other aspects of 17th-century culture relevant to our own life and times.

Roo Angell has been in touch (summer 2012) to say, ‘We are working on some exciting developments at the moment which I hope would interest everyone who came to the Study Day. At the moment we are probably still a little way away from solid news, but over the next few weeks we are hoping for certain elements to come together.’ Have a look at Deptford isfor alternatives to the proposed development and details of the Build the Lenox project. Also see Londons lost garden

A version of this report first appeared in London Landscapes.