‘The true taste of beauty’: Gardens in the Letters of Samuel Molyneux 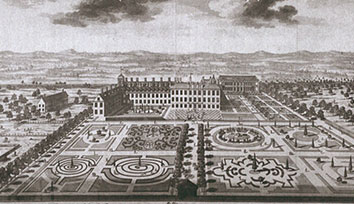 ‘The true taste of beauty’: Gardens in the Letters of Samuel Molyneux

In October 1712 Samuel Molyneux (1689–1728) travelled to London from his home in Dublin to be enrolled as a Fellow of the Royal Society. Being the only child of the celebrated astronomer, philosopher and constitutional writer William Molyneux, (1656–98) and in his capacity as secretary to the Dublin Philosophical Society, the young Samuel had long nurtured good relations with the intellectual elite. Once in the capital he exploited these connections to seek audiences with the foremost collectors and connoisseurs of the day and to view their prized collections housed in ecclesiastical and secular buildings, historic royal palaces, parks and gardens.* Where he went and what he saw was recorded in a series of intelligent and well-measured letters written to his learned uncle, Thomas Molyneux (1661–1733), back in Dublin. These accounts of early-Enlightenment London, Oxford and Cambridge were quite unlike the prolonged social commentaries offered by other travel writers, such as, Zacharias Conrad von Uffenbach (1710), Daniel Defoe (1720) and Don Manoel Gonzales (1731).**

Part of the manuscript may be familiar to members of the Society, as four of the 159 folios were published in 1975 by John Dixon Hunt and Peter Willis in their book The Genius of Place: the English Landscape Garden 1620–1820. The focus of the editors attention was Molyneux’s visit to the gardens of Lord Rochester’s house in New Park, overlooking the River Thames near Marble Hill, an account they described as ‘possibly the earliest account of an actual landscape garden, as opposed to theoretical formulations of the idea’. New Park, however, is just one of several first-hand accounts relating to gardens and landscapes.

Throughout his commentaries Molyneux displays a sound understanding of the rationality, logic and consistency of garden design and, as such, acts a barometer of early-Enlightenment thought. In forming his opinions he echoes those of his contemporaries, such as, Joseph Addison, of the Tatler and the anti-Baroque polemic of Anthony Ashley Cooper, 3rd Earl of Shaftsbury who, along with many other Whig Protestants, decried the inflexible contrivance and ordered philosophy of the Baroque garden and favoured a return to tamer, more intellectual, classical style. Molyneux approves of ‘noble grown trees in wild woods’ and ‘Natural Woods and Waters & a distant prospect’ and disparages the ‘pleasure a great man takes in be able to force nature, and to make and finish a garden in a Season’ as being ‘vain Efforts’. His confidence in natural landscape over anything artificial makes him a staunch critic of many of the gardens he visits.

At Bushy Park, for example, a landscape created by Lord Halifax, he writes of ‘little or nothing remarkable but the Cascade which was not very high’, while at Hampton Court he approves of the situation but expresses a disappointment with the French geometric designs, leading him to comment ‘I did by no means think it adequate in the whole to the notion I had of the Palace of a great Prince’.

Her Majesties Royal Palace at Kensington

Kensington Palace too falls short of his expectations (above). Its elevated reputation as a ‘Masterpiece of Art in the new regular manner of greens and gravel gardening’ is censured when Molyneux concludes ‘I say all this be in its way very agreeable yet in my opinion all this falls so low and short of the sublime unconfinedness of nature…I cannot conceive how the world is so entirely fall’n into this way of gardening’.

His companion on this visit was, most likely, Joseph Addison, who appears to have helped shape Molyneux’s opinion as he dutifully records in his letter ‘[he] did not like these Epigrams in gardening and was much more pleas’d with the Epick Style or the Pindarick’, a reference to the paradise garden in Greek literature. Addison established this very point five months before in the Spectator when he wrote ‘As for my self, you will find, by the Account that I have already given you, that my Compositions in Gardening are altogether after the Pindarick Manner, and run into the beautiful Wildness of Nature, without affecting the Nicer Elegancies of Art’, (6 September 1712).

Not every garden incurred Molyneux’s wrath. New Park he describes as ‘perfect satisfaction’ and ‘beyond anything I have ever seen’ adding ‘I think I have never yet seen any piece of Gardening that has so much of the true taste of beauty [it] seems the Endeavour rather to follow than to alter nature, and to aim at no beauty but such as she before had seem’d to dictate’. He admires the exotic plants at Chelsea Physic Garden and Fulham Palace, the home of the Bishop of London, and the topiary at the Kensington nursery of George London and Henry Wise, despite his self-admission of having no grounding in ‘Botanicks’.

On leaving London Molyneux visits two of Wise’s incomplete projects. At Windsor Castle he witnesses the reorganisation of the Maastricht garden which only gets a fleeting reference of being ‘extremely steep [and] cut into 3 or 4 noble slopes’ while the fragmentary garden and landscape at Blenheim Palace he describes in detail predicting that it will develop into a thing of great magnificence. This is the great quality of these letters. They offer hope for the future, not only in sense of place but in the emerging disciplines of art and science. They are evocative of early-Enlightenment philosophy, generating a shift from the formalism of the Baroque towards a new elegance suitable for the impending Hanoverian age.

The London Letters of Samuel Molyneux, 1712–13 is published by the London Topographical Society, £20