The Renaissance of Hardwick Park 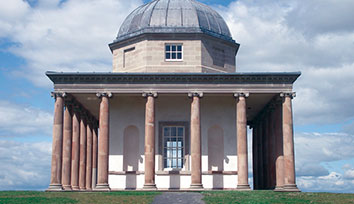 Hardwick Park just outside Sedgefield, County Durham is rising from its dereliction towards its former splendour and has many parallels with Painshill in Surrey, from the fate of its owner to the meticulous archival and archaeological research undertaken before restoration was even attempted. The progress over the last four or five years has been remarkable and this unsung gem is well worth visiting.

The grounds were laid out in the 1750s by John Burdon who inherited money from his father’s saltpan business and increased it by all sorts of schemes. He wanted a landscape with a circuit walk and that is what he laid out, with a meandering walk from gothic feature to classical then back to gothic, nine in all. Each feature was laid out so that the sight-lines from any one feature to any 2 others were exactly 22½? but the only place to see it all at once was from the top of the tower of the Gothic Ruin. The buildings were designed by James Paine and workmen such as the stuccatore, Guiseppe Cortese, John Bell, a local builder, Francis Hayman & Samuel Wale for frescoes and paintings, were brought in to produce a sumptuous feast. All these are commemorated on the banqueting table, one of the quirky seating areas dotted around the landscape.

In truly Hamiltonian style Burdon also ran out of money before he could build his grand house and had to sell up. By the late 19th century the estate fell on hard times and the banqueting house, gothic seat, bathhouse all disappeared, the rest of the buildings were barely there, the lake silted up and the views long gone.

The knight in shining armour who rode to the rescue was Durham County Council who ran part of the site as a Country Park. In 1999 they commissioned research into the history of the park, supported by the HLF, leading to the upgrade of the Park to II* and to DCC acquiring the 108 acre East Park and more of the gardens. More HLF money has restored the gardens; trees have been cleared, the gothic seat and splendid Temple of Minerva (although without the statues and frescoes as yet) rebuilt and the planting of formal hedges and eighteenth century ‘shrubberies’ is underway.

The view along the grand terrace between the bathhouse and Sedgefield church is restored and the cascades are running again. The Serpentine River is now presided over once again by Neptune and the lake is a mirror of tranquillity. The not-for-sitting ‘seats’ dotted around the landscape are all painted white and range from the banqueting table and chairs, to a pair of library steps, to a chaise longue, to an artist’s easel and stool. And they all have aphorisms painted on them such as ‘Lady Hamilton. She sent a servant to enquire whether it was convenient to view the park —’ and,‘My brother has just returned from the Grand Tour and tells me that the views at Hardwick are just as good as Italy, so I come here twice a week, as Mama always says, a true Lady sketches on Mondays and Thursdays’.

There is more still to do; the grotto, a forlorn pile of stones cries out for some archaeologist to dig into the hillock and find the subterranean chamber which other masonry on the site hints at. Not all is to be restored, the façade of the Bono Retiro is to be consolidated. A shame as it must have been the perfect place for the library which was there in Burdon’s day. Others, such as the magnificent neo-classical bathhouse with Doric columns will remain just as foundations.
More heartening is the involvement of the Hotel which occupies the house Burdon never got round to replacing. The grounds between the two are marked by a simple estate railing, with a small gate for weary tourists (of whatever era) to wend their way to the house and sip tea, or something stronger, looking over the lake to the Temple as John Burdon must have done.