Picturesque landscape at the Kymin in Monmouth at risk 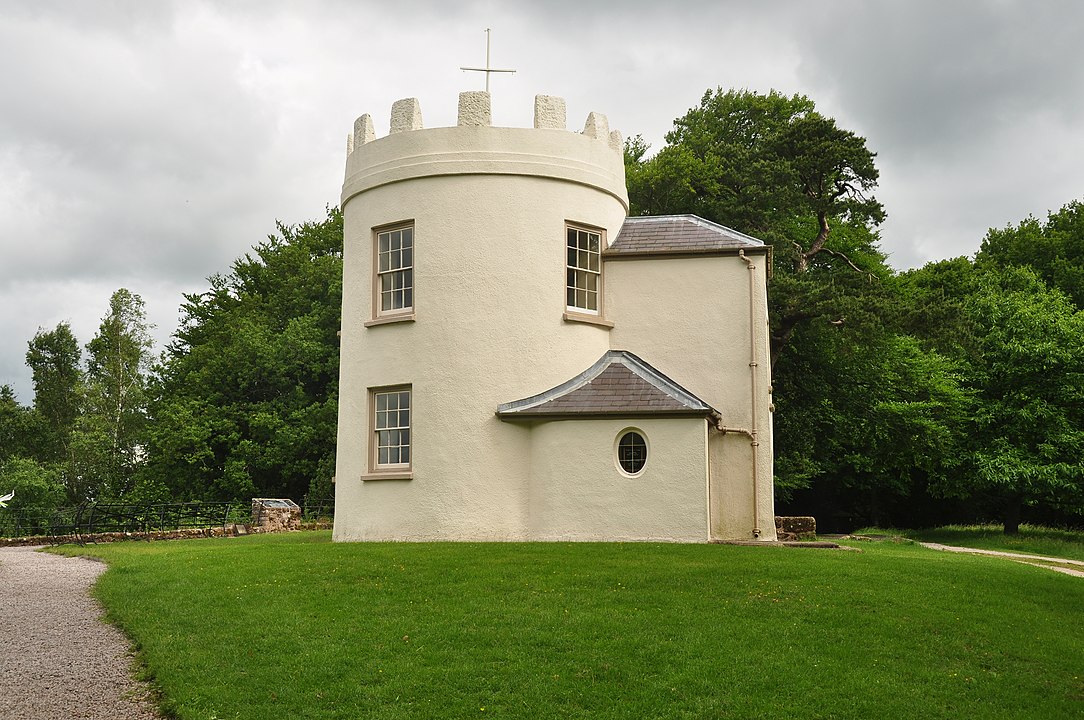 The landscape at the Kymin, overlooking Monmouth, is listed by CADW at Grade II as one of the the treasures of the Picturesque in Wales. It features an 18th century Round House, picturesque walks and a Naval Temple celebrating great British admirals and victories. The National Trust acquired the Kymin from the Duke of Beaufort’s estate in 1902 and it was their first property in Wales. Now the National Trust have made its two custodians redundant and it has been reported that the landscape will be allowed to ‘go wild’.

The Kymin at risk from National Trust cuts

The Welsh Historic Gardens Trust have alerted us to the worrying situation at the Kymin. Although the site attracts some 65,000 visitors a year, the National Trust proposed to cut these roles in August 2020, citing its straitened circumstances.  At the time Monmouth councillor Richard Roden told BBC News that local residents were shocked at the possibility of custodians being removed: ‘They play an essential role in keeping the property and area safe for the community and visitors to one of Monmouth’s top visitor attractions.’  According to the South Wales Argus ‘The plans would see the Round House stay closed “for the foreseeable future” – and for the first time since it was owned by the trust in 1902 it would be left without custodians living on site.’

The National Trust have now completed their 45-day review period and the two custodians have lost their jobs and will have to leave their home, despite local protests. In a letter to the Daily Telegraph (28th October 2020), Brenda Hill of Monmouth reports that the landscape will be allowed to ‘go wild’. This seems to be at odds with the National Trust’s stated purpose to protect and look after the historic sites in its care. Indeed, their website for the Kymin says: ‘We celebrated a grand re-opening of the newly restored Naval Temple on 1 August 2012, exactly 211 years after its official opening on 1 August 1801, and will continue to preserve this unique monument forever, for everyone.’

The thought that this important landscape and its unique buildings might instead now be abandoned is shocking.

Picturesque features at the Kymin

The Round House on the Kymin hill is described in the book Historic Gardens of Wales (1992):

‘This is a two-storey belvedere erected by the Monmouth Picnic Club in 1794. A winding path led up to it from the town. Here the public could, on payment of sixpence, use the banqueting room and admire the still-magnificent views from five windows. There were instructions on how to look at each view in the correctly picturesque manner. Walks were cut [and] along them were six seats, each with a special view created by tying back branches of trees. Next to the Round House the Naval Temple, a small square classical building, was erected in 1800 to commemorate the great early naval battles of the Napoleonic Wars. In 1802 it was visited by Nelson and Sir William and Lady Hamilton.’

The Round House is listed as Grade II* because of its ‘exceptional historic interest, its design and its very important contribution to the landscape and views around Monmouth’ and the Naval Temple at Grade II.

The Kymin is listed at Grade II on the Cadw/ICOMOS Register of Landscapes, Parks and Gardens of Special Historic Interest in Wales.  The nine-acre landscape is described as a ‘fine example of Picturesque taste and landscaping’.

The Naval Temple was ‘dedicated on the first of August, the second anniversary of the Battle of the Nile, by the Duchess of Beaufort (daughter of Admiral Boscawen, one of the naval commanders commemorated by the temple) who was responsible for the ‘fine carriage road’ up to the summit. The summit was used for any important Monmouth celebration, and in 1905 there were huge celebrations there for the centenary of the battle of Trafalgar.’  Nelson described the temple as ” the only monument of its kind erected to the Royal Navy in the Kingdom”. Charles Heath, the Monmouth antiquarian and publisher in his Descriptive Account of the Kymin (1807), recorded that ten counties could be seen from the Round House – Gloucestershire, Monmouthshire, Glamorganshire, Breconshire, Montgomeryshire, Herefordshire, Radnorshire, Shropshire and Somerset.