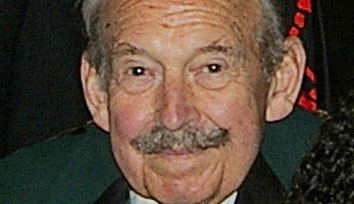 Anthony du Gard Pasley, who died on 2 October 2009, was above all a garden designer, but he was also a landscape architect, lecturer, teacher, author, garden judge, restorer of old houses and a confirmed Scotsman. Indeed he died in what he had come to think of as his real home, Moffat in the Scottish Borders near to the roots of his beloved Paisley clan, though a considerable distance from his other home near Tunbridge Wells.

Anthony was an instantly recognisable figure, whether in thorn-proof plus-fours, cape & deerstalker complete with monocle, or in the smartest kilt and jacket, his signature upward pointing moustache ‘giving a pleasant countenance’; always immaculate, but never aloof. A twinkle in his eye revealed his mischievous sense of humour, which always outshone his military bearing; presumably refined during his period in the Royal Army Service Corps.

To pursue a career in garden design, he initially served as a paying pupil under Brenda Colvin, first at her Baker Street office and then at 182 Gloucester Place, the office she shared with Sylvia Crowe. He then left to work for a period with landscapers Wallace & Barr of Tunbridge Wells, as he related in his recent GHS talk. He then returned to London to resume working for Miss Crowe, who had a mixed clientele combining very grand gardens but also new-towns, forestry, reservoirs and power stations, in the period when landscape architecture began to break away from its horticultural roots. This work is recorded in the books he helped see to press, Miss Crowe’s Garden Design, Landscape of Power and Landscape of Roads (all 1958). It was in this period that John Brookes came to work in the office, forming a friendship that was to last for fifty years.

Anthony’s garden design work was characterised by an understanding of space, a control of plant texture and form (decisions on colour came last) and a willingness to remain involved with a garden for many years, perhaps most notably at Pashley Manor in East Sussex. He seems to have been as happy working in gardens in need of restoration as new gardens, and was unafraid of modern materials. Other gardens he designed that are often open include Old Place Farm, in Kent and Parsonage Farm, in West Sussex.

Anthony’s design for his then front garden appears in Modern Private Gardens, Susan and Geoffrey Jellicoe’s 1968 survey of contemporary gardens, and it was Susan Jellicoe who encouraged him to write more. Many of his gardens in the UK, France, Switzerland and elsewhere, were later written up in the pages of Country Life, always in the third person, often discreetly critical of the designer, himself. He specialised in articles about particular aspects of gardens, reflecting his teaching role. He also wrote for the Observer and the Architectural Review amongst others, and he wrote two books, Summer Flowers in 1977, and The English Gardening School (1987), with Rosemary Alexander.

Anthony lectured on gardens at various of London’s polytechnics, the School of Architecture in Canterbury, and later at the AA and the Inchbald School of Design in London for John Brookes, and internationally. In 1983 Rosemary Alexander set up the English Gardening School, based at the Chelsea Physic Garden, where Anthony encouraged another generation of garden designers. Visits to gardens where he had been involved were an important part of the teaching process; perhaps most stimulating was his own garden in Tunbridge Wells where he was unbound by the restraints imposed by clients. That same front garden, now mature, showed his particular talent for using foliage. The more expansive main garden was a vision in pale mauve, pink and violet poppies, at least in my memory. The interior was as carefully thought out as the garden; curtains opening on to the garden formed part of the overall colour scheme for both indoors and out.

He became a principal judge of garden design at the Chelsea Flower Show, and was an active member of the Royal Caledonian Horticultural Society. Members of the GHS will remember his presence on many study tours and at the AGM and Annual Conference, where he formed a genial double act with John Rotheroe of Shire Books on a stall trading as ‘Pasley & Rotheroe; Booksellers to the Horticultural Gentry’. They sold not only those ubiquitous slim volumes, but also acted as agent to other members who relied on them to sell their own titles, which certainly added to the bookkeeping side of the undertaking. He spoke to the GHS as part of our Winter Lecture Series in March 2007, without notes, or slides, for over an hour, and then at the GHS Study Day in November 2007 on Sylvia Crowe as part of the day’s programme on post-war landscape designers. He led several Society visits to gardens in which he was involved, notably to Pashley Manor and more recently to gardens in the Hambleden Valley and near Henley.

Anthony celebrated his eightieth birthday last August, in Moffat surrounded by friends. Although recently unwell, he died not too long after of short, unexpected, illness. CB