The Kymin, a remarkable cultural landscape. 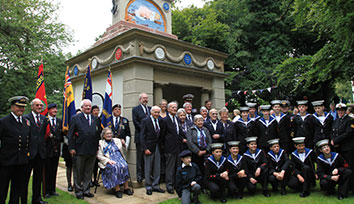 The Kymin, a remarkable cultural landscape.

Seven hundred feet above Monmouth are the Kymin Rocks. From here there are views over ten counties and once one could see far down the Wye Valley to the Wyndcliffe and Piercefield. In the eighteenth-century there were those, encouraged by Gilpin’s Observations, who searched for stations from which picturesque views of the landscape could be seen or composed. For local landowners and the people of Monmouth there was no need to search, and their excursions into the countryside were not to satisfy the tyranny of the eye, they were just for fun.

Going again and again to picnic amongst those rocks, and encouraged by the Duke of Beaufort, they decided to make a ‘slight’ pavilion in a place which ‘enjoyed a Prospect, equal in point of richness and picturesque beauty, to any inland view in the while range of the kingdom.’ This was completed in 1796 and is now known as the Round House the windows of which were intended to offer composed pictures of near, middle and distant views.

The building of the pavilion, funded from public subscriptions, was supervised by a Mr Hardwick who then set to work on the adjacent woodland called Beaulieu Grove. Accessed through a large door, now lost, suggesting enchantment to be seen beyond, he created two paths, one with six different seats offering views of particular incidents in the landscape leading to a platform with views of the great sweep of the Wye above Monmouth and a returning route from which the churches of Buckstone and Stanton could be glimpsed.

The restored Kymin Pavilion, or Round House, showing the nineteenth-century additions

The National Trust have put the Round House into good order and manage its grounds, including the bowling green which added to the attraction of the place for the people of Monmouth. However, Beaulieu Grove is now owned by the Woodland Trust who appear to show no interest in its history or cultural importance. For that reason alone the more people who visit and appreciate the significance of Beaulieu Grove the more likely it is that the Woodland Trust will be persuaded to take a more positive approach to the important heritage asset that it has in its hands. There is open access to it since Offa’s Dyke Path runs past the Round House and through the Grove along the spine of the hill.

If this were all, any traveller to or through Monmouthshire should not miss the opportunity to visit this remarkable landscape. But there is more not to be missed.

Nelson’s victory at the Battle of the Nile on the 1st August 1798 had an electrifying effect on the British who were dispirited by the threat of invasion, the French Revolution, economic distress and civil unrest. The mood was captured in a letter from, Hon. Mrs Edward Boscawen to Hester Pitt, Lady Chatham.

I have waited and waited at length I am satisfy’d indeed: delighted, triumphant! Last Night I had a great N in brilliant Lamps adorning the Front of my Mansion and All our royal Village was illuminated. My Walks have been render’d pleasant by the continual Sound of Bells ringing All around, the Fire of Cannon without ceasing… God be prais’d that Thus our success extends, and that the Fear of Us, and the Dread of Us is thus impress’d on those Monsters the french who have overturn’d the World, and extended Slavery and Misery to the remotest Parts of It.

Even in Monmouthshire, far, far inland there was a feeling of general relief and gratitude for the exploits of the Navy and 15 of its Admirals who, over the past 50 years, had kept the sea lanes of the world open and held back the French navy. A monument to naval success was built next to the Round House, in 1800, by enthusiastic local people, and it was surmounted by Britannia holding a trident rather than a spear in her hand to symbolise Britain’s mastery of the seas, one of the first occasions when she was thus portrayed.

The rededication of the Naval Temple on 1 August 2012

After an £80,000 restoration, funded by the National Trust and CADW together with other private donations, the Naval Temple was rededicated by Commodore Toby Elliott in the company of the captain of HMS Monmouth, Commander Gordon Ruddock, on the 1st August 2012, the anniversary of the Battle of the Nile. There to witness the event was Mrs Anna Tribe OBE (seated), a descendant of Admirals Nelson and Boscawen and of the Duke of Beaufort. The Temple now stands as a proud reminder of the achievement of the Royal Navy in defending our peaceful enjoyment of those ten counties which can be seen from the Kymin.