Historic Houses and Gardens Fight Back 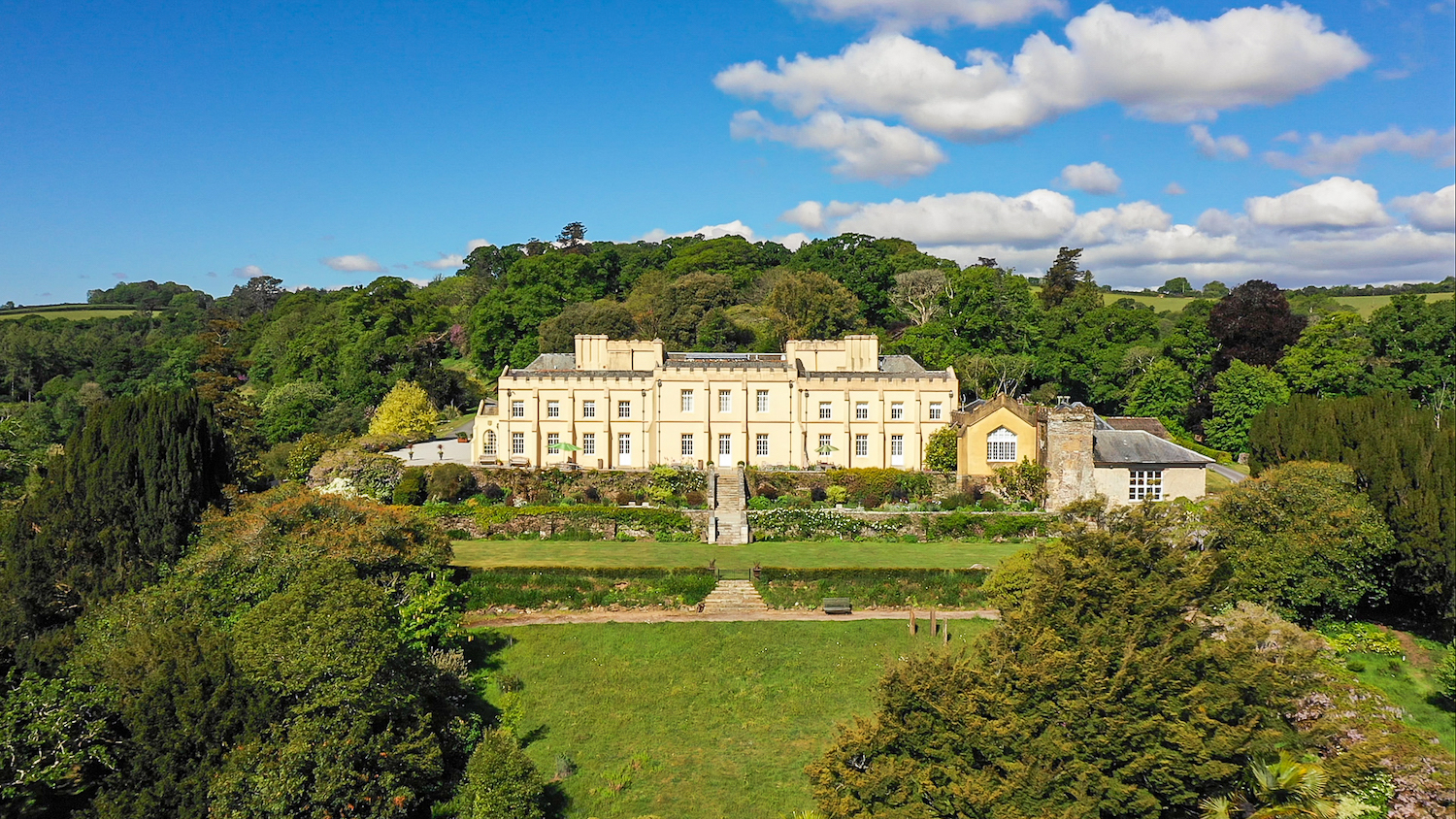 The talk at historic houses and gardens earlier in the year was all about events that had been cancelled and not being able to open to visitors despite the beautiful spring weather.  So it has been encouraging to catch up with them again now and hear how they have fared since reopening at the end of May.

We hear from six properties and how they have adapted during these challenging months. Many of us have particularly enjoyed visiting historic gardens since they opened as a respite from the seclusion and restrictions of lockdown. There is still time to visit these houses and gardens, and many others, before they close for the winter.

July is usually the busiest time of the year for Suffolk’s Grade II Henham Park. An 18th century landscape, and the subject of a Humphry Repton Red Book, it is probably best known as the home to the three-day Latitude Festival, regularly attracting around 40,000 people. By the end of April, the decision was made that Latitude would not be going ahead in 2020, followed in July by the cancellation of the Henham Grand Steam Rally, normally held in mid-September.  Although the loss of these events is a considerable blow, Henham’s owner, Hektor Rous, has been quick to point out that the biggest impact will have be felt by the local businesses and the surrounding communities. The festival attracts a significant number of visitors who use the pubs, shops, hotels and local facilities while the steam rally is a charitable event raising funds for local parishes and strengthening community ties by using a large number of volunteers. 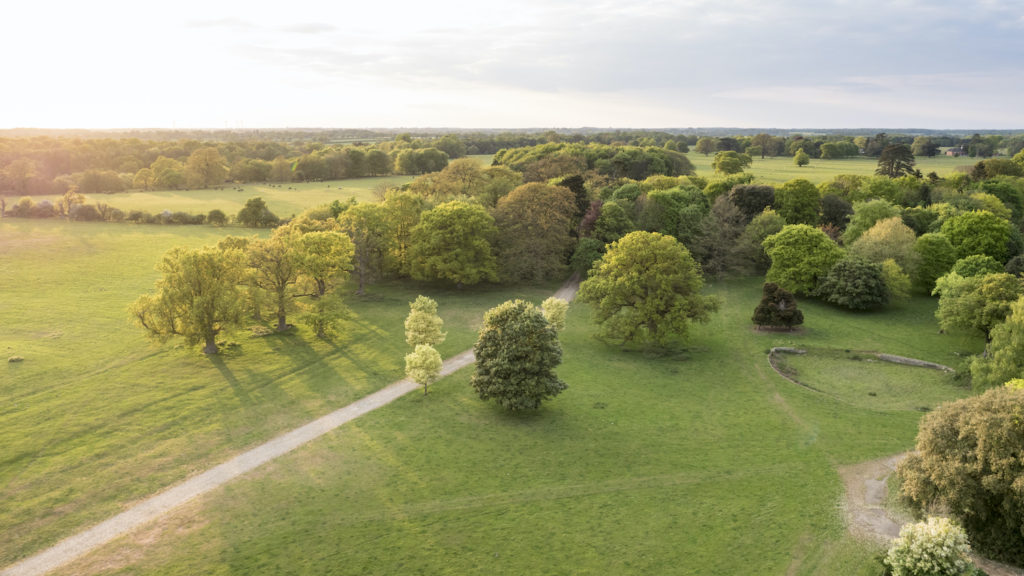 The parkland may have remained quiet over the summer, but these past few months have enabled Hektor and his team of 25 to work on accommodation for new entrepreneurial businesses as well as formulating Henham Park’s 10-year forestry and 20-year landscape plans. The estate holiday lets have been busier than ever with people taking staycations in the UK and the restored barn is about to see its first wedding of the year.  This barn has been the venue for pop-up pizza evenings since April, selling on average 250 meals and giving the local community an evening out and a touch of normality during lockdown. The first evening saw 100% of the cost of each pizza going to the NHS at nearby James Paget Hospital in Gorleston.

High Beeches, listed at Grade II*,  sits on the High Weald in Sussex and is a 32-acre garden well-known for its carpets of bluebells and impressive collections of magnolias, camellias, rhododendrons and azaleas in spring. Understandably, the loss of garden visitors in April and May made for anxious times for its owner Sarah Gray and the fine sunny weather just rubbed salt into the wound. 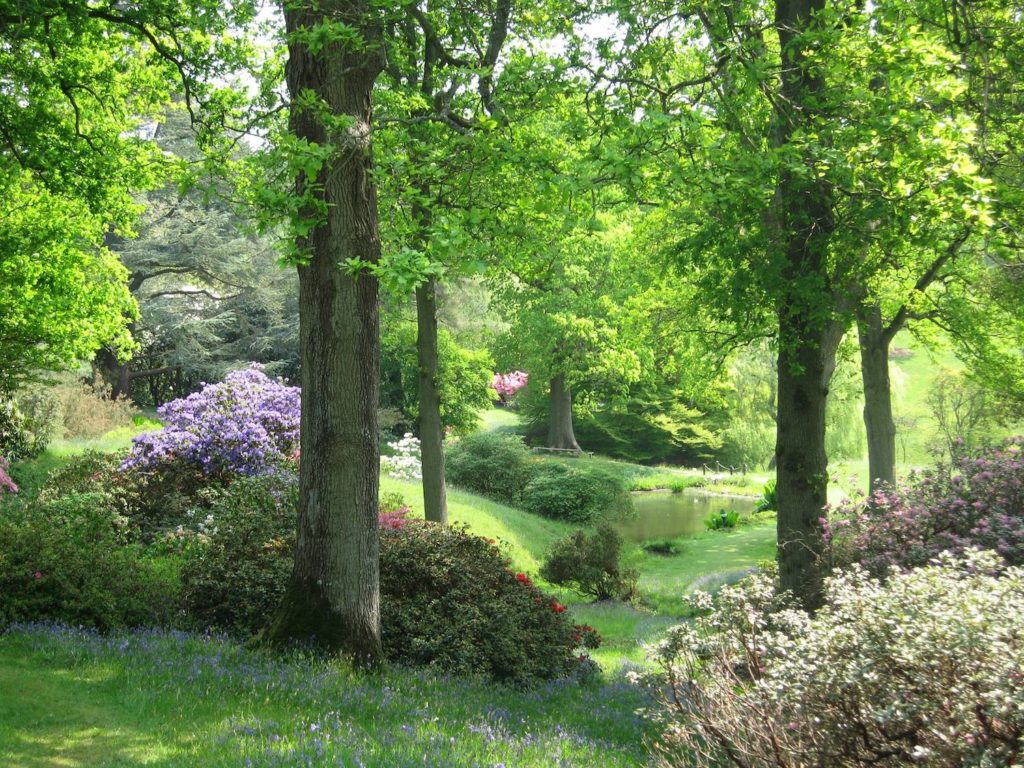 High Beeches was ready to open on May 22 for the Spring Bank Holiday weekend. The café is run by a third party which enabled Sarah and her family to man the entry points, car park and regularly sanitise the facilities – and hope that visitors would turn up – which they did! The gardens have seen a whole new demographic of garden visitor – families, younger people and day visitors from addresses north of London. It would appear that not having to pre-book visits has given High Beeches an advantage over the many other gardens in this part of the country.

Glorious Pentillie Castle on the Cornish bank of the river Tamar is another Repton Red Book site and has been turned around by Ted and Sarah Coryton since they inherited the estate in 2007.  Normally, there are five or six garden open days in Spring and a few coach parties, but it is the events and B&B guests that have significantly added to the estate’s farming practices. Cancellations in 2020 included the Estate Ride for 180 horse riders, three outdoor theatre evenings, five clay pigeon shooting competitions, Defender Days for circa 1000 Land Rover enthusiasts and ‘Pengrillie’ (barbecue competition attracting 2000 visitors); on top of the cancellation or postponement of 20 weddings.  Ted Coryton, speaking of their situation, says ‘financially threatening but we’re not over yet!’ 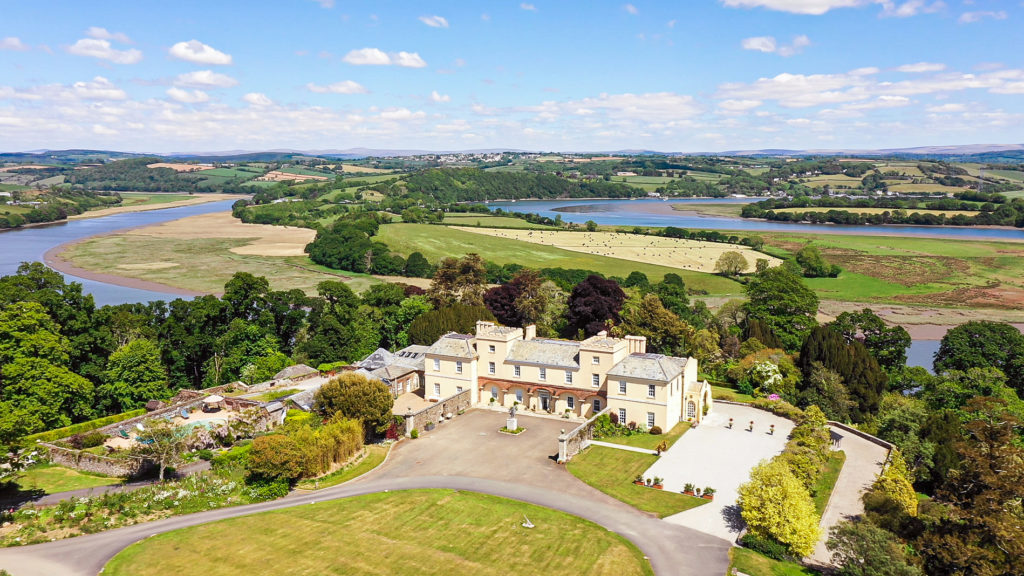 This year has pushed Pentillie Castle to reconsider its business model. The recent years’ expansion of local Airbnb rooms has been undercutting the Pentillie’s B&B offers. Since reopening the house now operates as an Exclusive Hire where families or groups (22 double rooms) take the whole house for several days.  The live-in gardener, initially furloughed, has decided to retire. The plan is to now let out the gardeners’ cottage, employ day gardening staff for more flexibility and buy in the bedding plants needed. The estate has undertaken a large project to remove diseased and dead ash trees, providing much firewood to sell this winter.  New species of trees have been planted on the estate too – all are on the Red List of Endangered Species and have been supplied by the Royal Botanical Garden in Edinburgh, to increase their geographical dispersion.  If the weather is set fair this September Pentillie may repeat a river concert from a couple of years ago. The band was floated up the river on the incoming tide, on a pontoon, before mooring up in front of the paying picnicking audience!

In Worcestershire we spoke to Grade II Hartlebury Castle, once home to the Bishops of Worcester but owned since 2014 by the Hartlebury Castle Preservation Trust. The gardens have been cleared by a team of 20 volunteers and, with a museum and café on site, Hartlebury Castle welcomes 20,000 visitors annually. HCPT Trustee and Lead Volunteer, Jane Finch, described how during lock down most volunteers were stood down and with no visitors, the income stream dried up. It was hard work for Jane and her partner to keep the newly planted borders watered and weeded. A crowdfund page was successful in raising a proportion of the short fall and they await to hear about their Culture and Heritage Grant application. 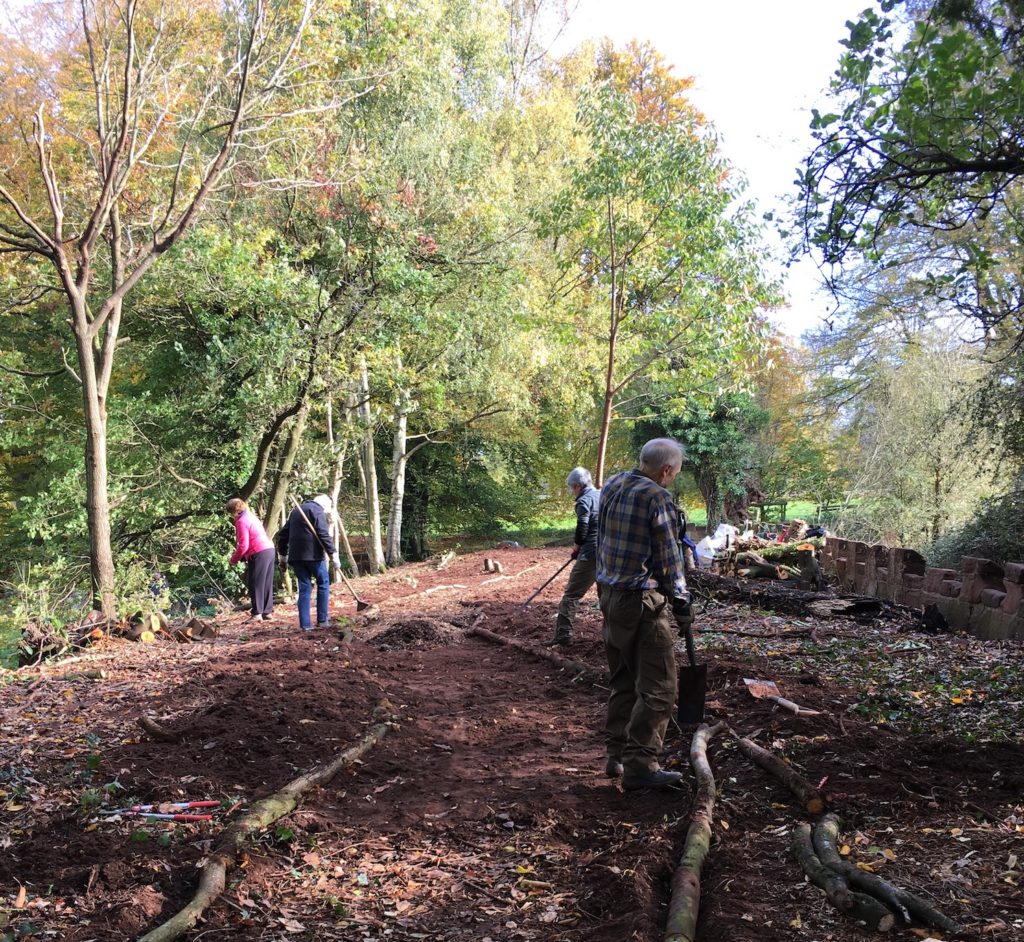 Since the gardens have reopened, the volunteers are back on site and have worked hard to clear the pathways and tackle Himalayan Balsam removal. The café has not been able to open but ice creams and drinks are available. To cut costs the gardens are currently open on Fridays, Saturdays and Sundays and Hartlebury Castle looks forward to holding events, weddings and hiring out rooms again.

Grade II Easton Park, Lincolnshire, has nestled alongside the Great North Road for over 450 years. After a few years as military barracks during the Second World War the Easton House was demolished in 1951 and the site lay forgotten until in 2001 owner Ursula Cholmeley spotted the potential of a restored ‘lost garden’ and work begun to clear the site with fantastic results. At the beginning of 2020, Easton Walled Garden’s popular snowdrop season was flooded out and then lock down saw the gardens close, the gardeners, apart from the head gardener, furloughed and events cancelled. However, Ursula says, ‘Easton survived the Civil War and it was in a far worse state in 2001, we were determined it would survive’. 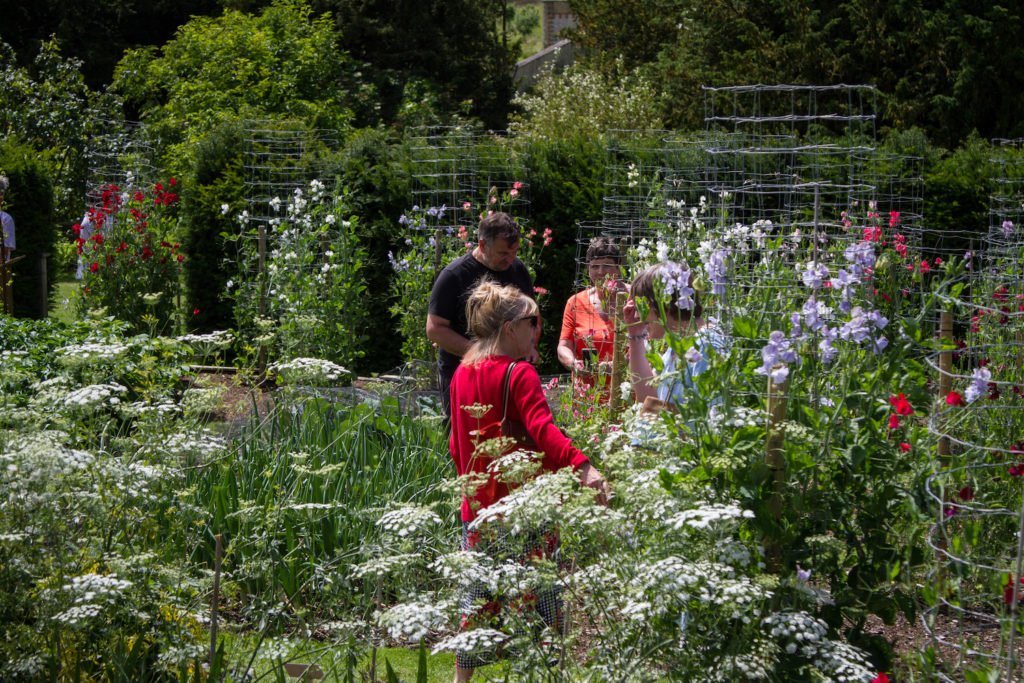 Fortuitously, in October 2019 a robotic mowing system had been installed, which helped the sole gardener by cutting down the time normally spent on this task. During lockdown Easton was very active on its social media platforms keeping regular visitors informed about the garden’s progress and reaching out to new audiences. As soon as it was possible to open again the people came back, seeking a happy and safe venue to enjoy and leave 2020 cares outside for a while. The popular Sweet Pea Week was extended to six weeks. This proved hard work but was successful in spacing out the visitors who did not have to book in advance. The Autumn Country Market will require visitors to book timed slots to avoid the 40 trading stalls getting too congested. For 2021, Easton is planning to treble the retail offer on site, while making sure there is lots to buy online including their delightful tins of heritage sweet pea seeds.

Our final historic garden is Kiplin Hall near Richmond, North Yorkshire. Samantha Jennings, Kiplin’s marketing and communication’s manager, describes how many staff were furloughed at the start of lock down, while those on the curatorial and office teams reduced their hours and worked from home. The onsite Warden and Head Gardener were invaluable for security, essential duties and providing topical media content. Initially, upon reopening, the gardens were open three days a week and are now open Friday to Tuesday. Visitors did not have to pre-book their visits but there was a back-up booking system in place should it be needed. To keep in touch with those feeling not able to visit in person, the Kiplin website carries video talks, searchable family trees and an impressive 3-D interactive model of the whole house. However, it was the garden that took centre stage for Phase One of the reopening. 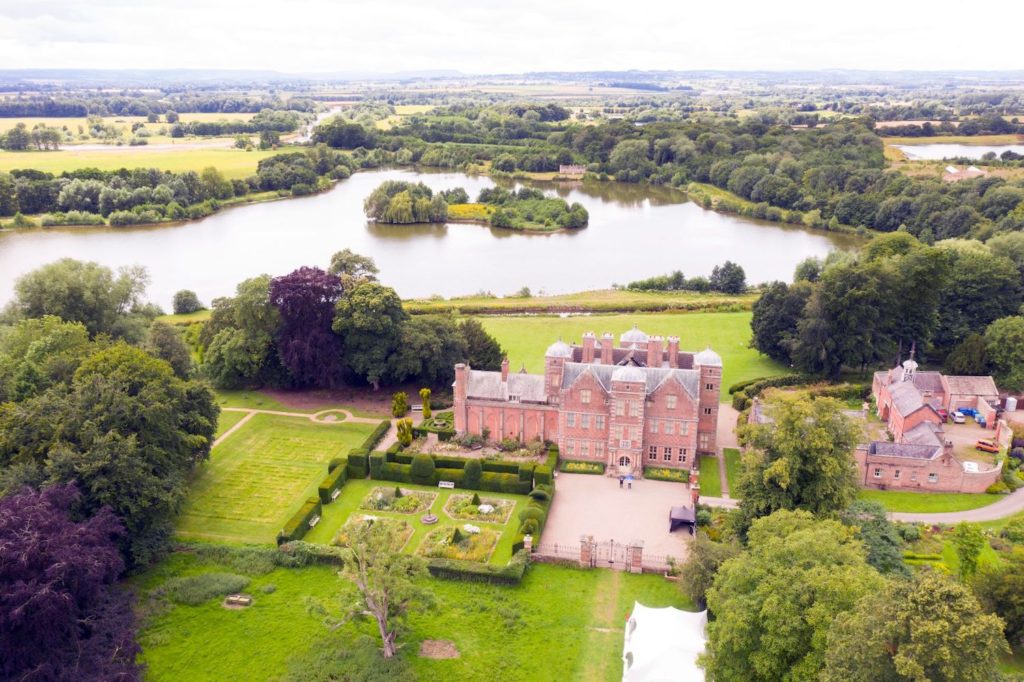 Marketing took a very local approach in June and July, deliberately targeting the population within half an hour’s drive by promoting their ‘destination on the doorstep’, it soon became evident that there was a large increase in families visiting to let the children run off a bit of steam after weeks at home. A quick change of approach saw a member of staff bring in his wood-fired pizza oven in a converted horsebox, the resulting pizza picnics have been incredibly popular and over the fourteen July open days, visitor numbers were 23% up on the previous busiest year. To quote Samantha, ‘it seems that as well as adding significant additional safety measures for staff, volunteers and visitors, the ability to quickly pivot, identify shifting audiences and trends in their needs is key to a quick recovery from the lockdown deficit.

Our grateful thanks to Hektor, Sarah, Ted, Jane, Ursula and Samantha at these historic houses and gardens for sharing their thoughts and photographs for the above article. Also, to Dominic Head at Historic Houses Association for his helpful suggestions.

Read our case study on how lockdown has affected gardeners in historic gardens.