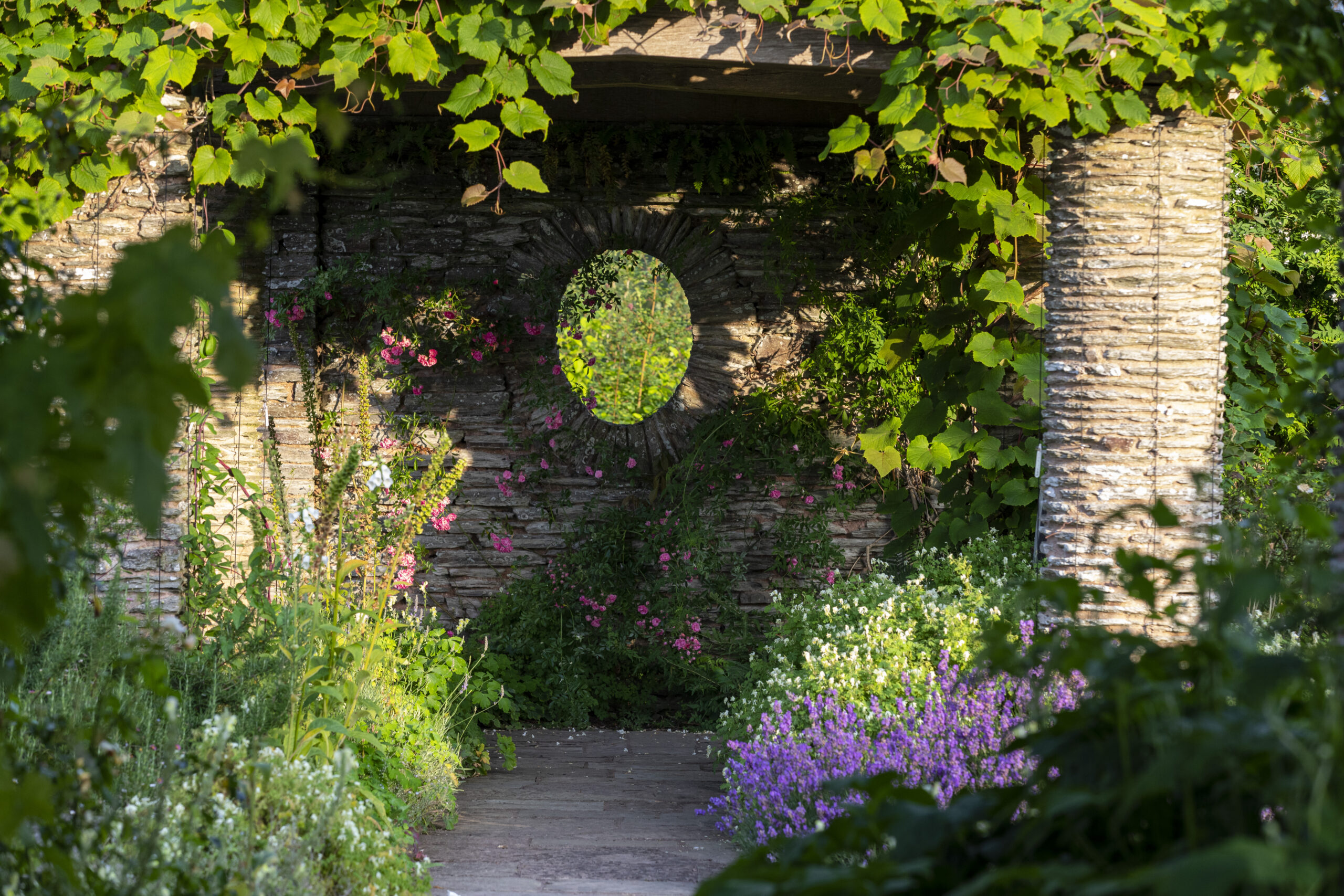 Created in the 1750s by Coplestone Warre Bampfylde, formal garden 1904 by Edwin Lutyens and Gertrude Jekyll
Registered Grade I

Hestercombe encompasses 50 acres of quintessential Somerset gardens, spanning three centuries of garden design. The estate offers a unique combination and varied experience of the Georgian landscape garden, designed in the 1750s, the Victorian shrubbery, and the Edwardian formal gardens of the early 1900s. Its formal garden is hailed as one of the finest examples of the world-renowned partnership between garden designer Gertrude Jekyll and architect Sir Edwin Lutyens. 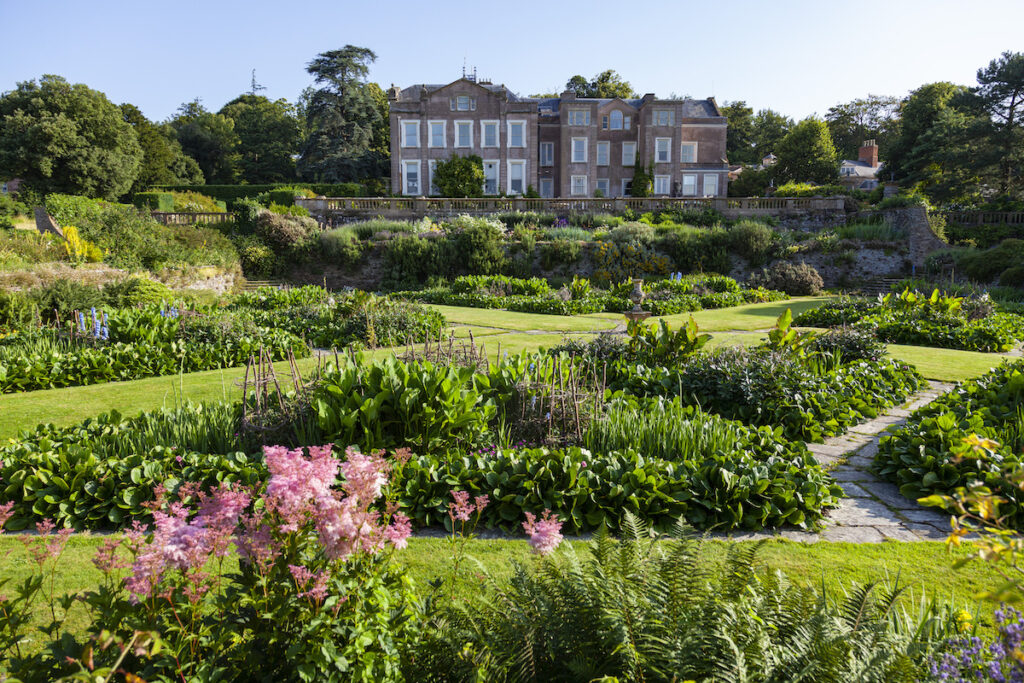 The gardens at Hestercombe developed over 200 years, but the house with its formal garden and the landscape garden were sold separately in the mid 20th century and have only recently been reunited. The Hestercombe Gardens Trust was established in 1996 to oversee the restoration of the gardens and to protect them for the future. The Trust have managed the gardens since 2003. With the support of its visitors and members, Hestercombe aims to reclaim, restore, preserve and enhance the heritage of landscape, gardens and buildings left in its care, and to protect its future for many years to come.

Hestercombe was first mentioned in an Anglo-Saxon charter of 682 and from 1391 until 1872 it was continuously owned by one family, the Warres. The first reference to a garden at Hestercombe is from a medieval document of 1249 which records ‘my Lord of Hestercombe’s garden’. The next reference is from the estate accounts of Sir Francis Warre for, ironically, pulling down a garden hedge in 1698. In 1731 John Bampfylde, MP for Exeter, who had married Sir Francis’s daughter Margaret in 1718, commissioned plans for a garden from a Mr Brown of London.

Coplestone Warre Bampfylde designed and laid out the Landscape Garden as we know it today, after inheriting the estate from his father in 1750. Miss Elizabeth Warre, the last of her line, died in 1872 and in the following year, Hestercombe was acquired by the 1st Viscount Portman who undertook considerable remodelling of the house including the creation of the Victorian Terrace.

Lavender in the pergola of the Hestercombe formal garden Photo © Hestercombe

In 1903, the Hon Edward Portman, his grandson and Hon Mrs Portman, commissioned Sir Edwin Lutyens to create a new formal garden with a planting scheme designed by Gertrude Jekyll. Hestercombe Garden’s Formal Garden is arguably the finest example of her collaboration with Sir Edwin Lutyens. 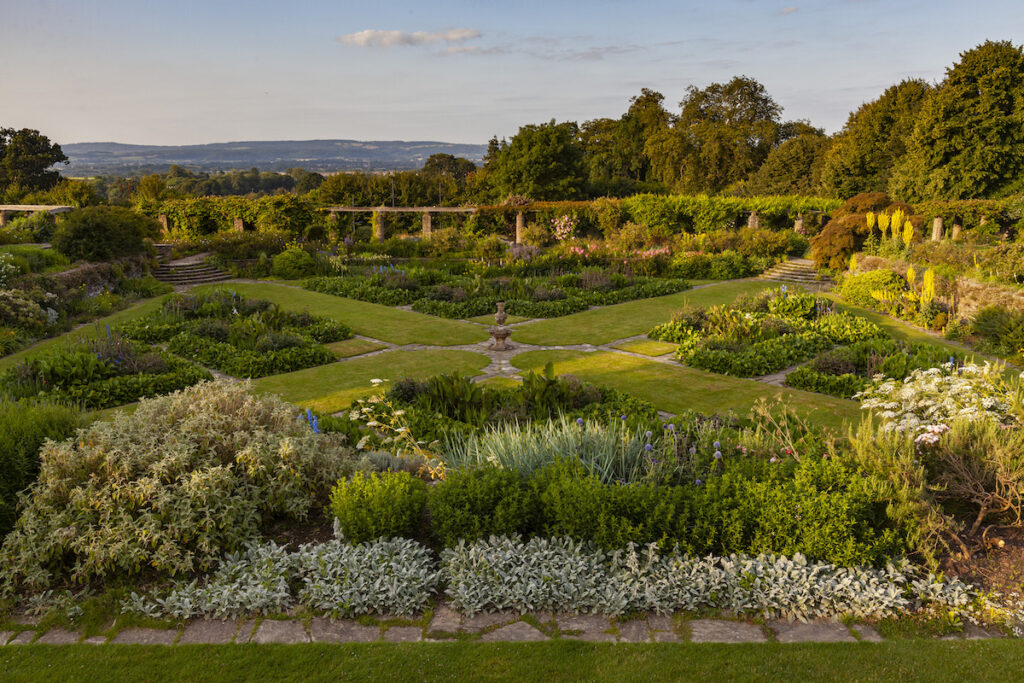 In 1944 the estate was sold to the Crown Estate with the exception of Hestercombe House and the formal garden. These were sold to the Somerset County Council in 1978. Since October 2003, the gardens have been managed by the Hestercombe Gardens Trust. Somerset County Council transferred the freehold of the house, Formal Garden and visitor centre to the Hestercombe Gardens Trust, under the Community Asset Transfer Scheme, thereby reuniting the house with its historic landscape for the first time in more than 60 years.

In September 2018, thanks to a grant from the National Heritage Memorial Fund, Hestercombe Gardens Trust was able to acquire land totalling 320 acres, securing the world-class, Grade 1 heritage landscape, gardens and buildings for future generations.

Let us take you on a journey: we begin by setting off along the gravel walk on the southern edge of Rook Wood. Discover a breathtaking view from the magnificent Daisy Steps, designed by Sir Edwin Lutyens to create a link between his formal garden and the earlier landscape garden. Enter the Victorian shrubbery, a small enclosed garden incorporating a nineteenth-century yew tunnel with views to the Victorian water tower.

Hestercombe’s landscape garden, designed by Coplestone Warre Bampfylde, incorporates the restored eighteenth-century Octagon Summerhouse and its framed views of the gardens both up and down the valley.

From there, journey onto the Terrace Walk, which leads to the Chinese Seat and the Valley of Cascades. Glimpses through the trees to see the Pope’s Urn,­ so named after the original design by William Kent for the poet Alexander Pope and erected in his garden at Twickenham. 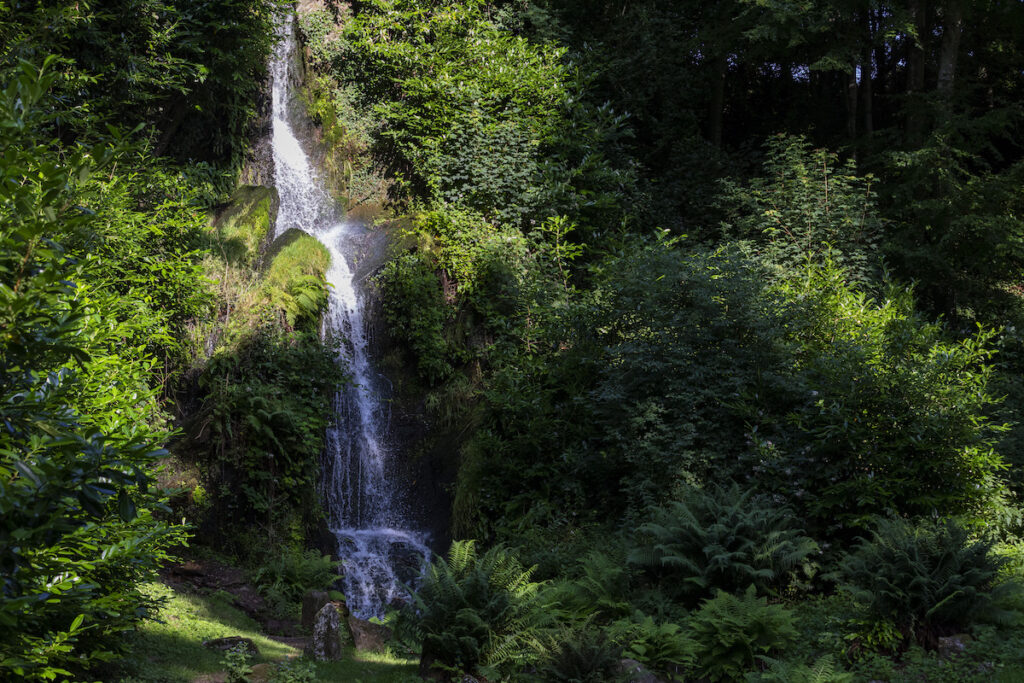 The great cascade in the landscape garden at Hestercombe Photo © Hestercombe

The spectacular Great Cascade is the dramatic centrepiece of the Landscape Garden and its theatrical effect was inspired by Bampfylde’s visit to William Shenstone’s garden, The Leasowes, in 1762. Opposite there is another viewing point – the Rustic Seat allowing the visitor to stop and contemplate this sublime scene. 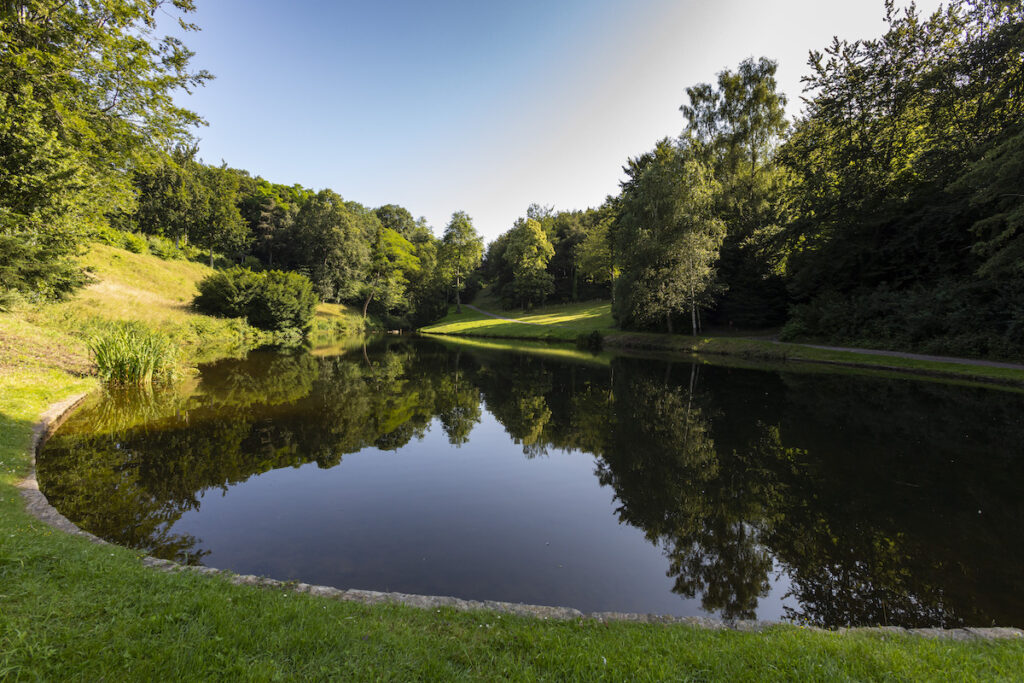 Two ponds, the Box Pond and the Pear Pond make for tranquil places to sit and reflect on your journey around the gardens. And further garden buildings, the Gothic Alcove, the Temple Arbour, the Witch House and Mausoleum all punctuate the walk towards the restored 17th century Water Mill with its Dynamo House and Mill Room. 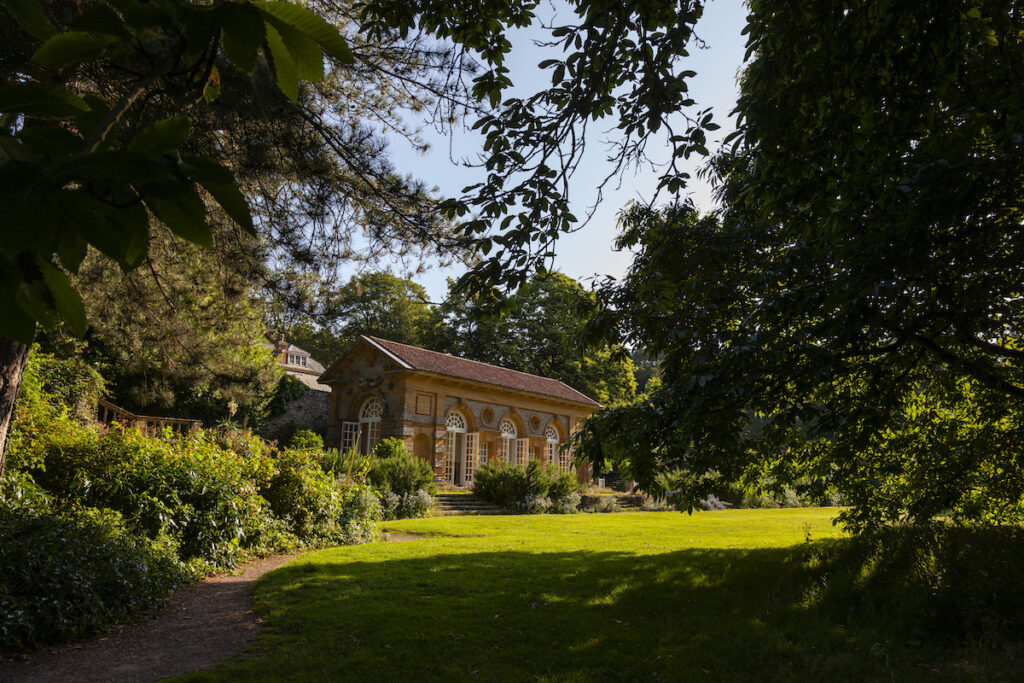 Cross the manicured Orangery Lawns towards the Formal Gardens where you’ll find the Dutch Garden and the impressive Orangery.

The Formal Gardens extend to the Rotunda with views across the East Rill and then follow the path across the Victorian Terrace overlooking the world acclaimed Great Plat resplendent with bright colours specified by garden designer Gertrude Jekyll. 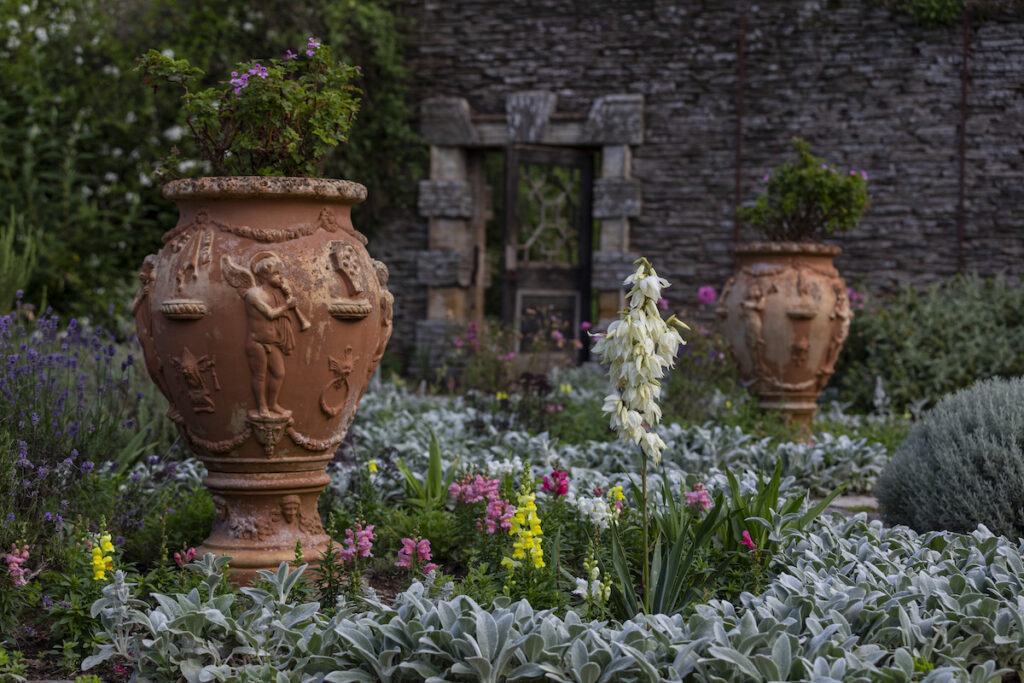 Descend the steps leading to the Grey Walk with soft borders of silver and grey leafed plants to The Great Plat – a great sunken parterre laid out with geometric borders edged with stone and ringed with luxuriant bergenia. The East and West Rills frame this garden with a Pergola enclosing the garden at the bottom and allow it to remain linked to and be part of the surrounding countryside.

Finish by venturing through the fragrant Rose Garden, designed by Sir Edwin Lutyens to offer cool shade, to discover yet more stunning views.