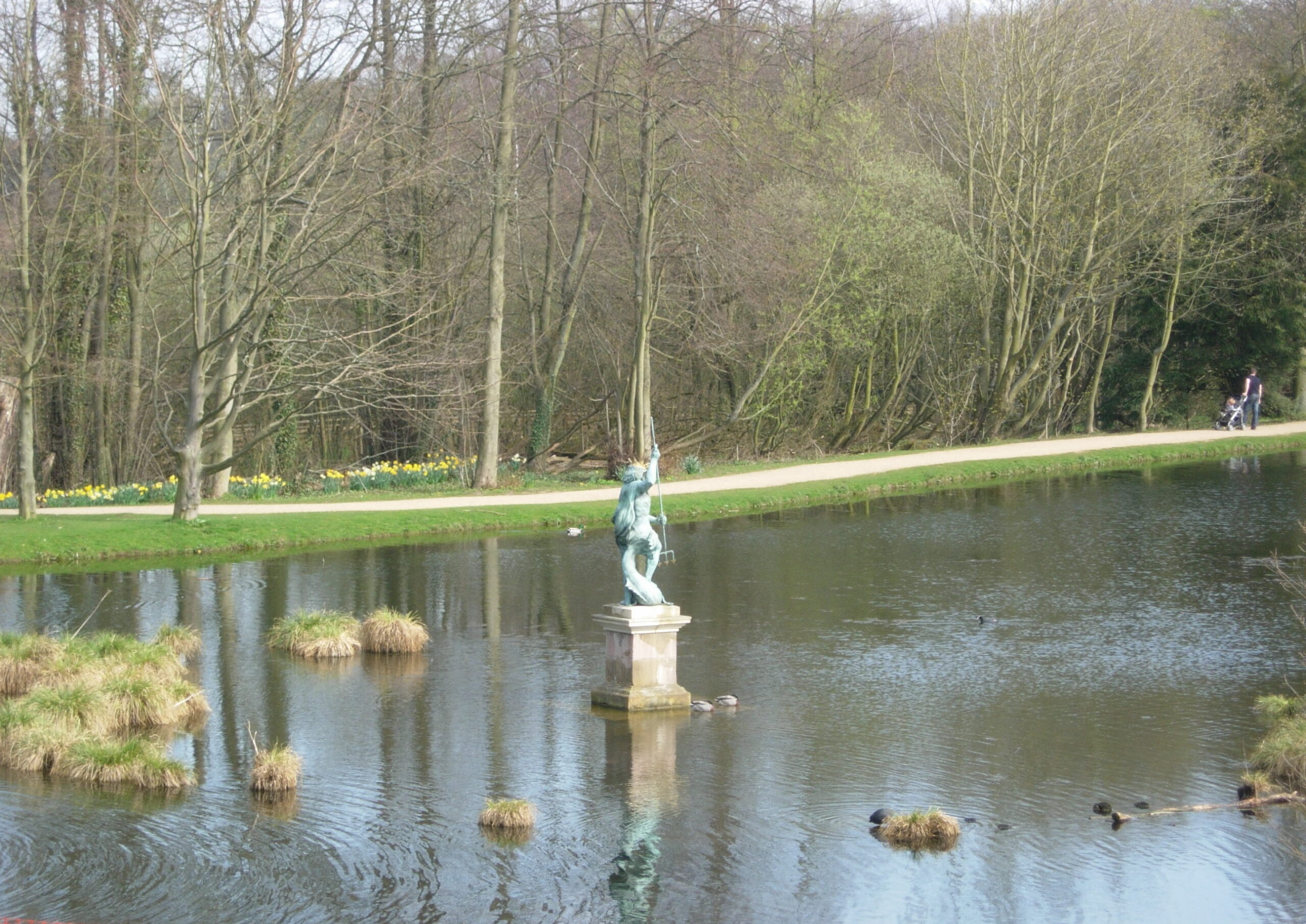 At Hardwick Hall, outside Sedgefield in County Durham, John Burdon created one of the finest parkland landscapes in the North East of England. The park was much visited and acclaimed in the later 18th century. Seven major garden buildings and smaller delights were set out on or near a circuit walk around a new lake and serpentine ‘river’. In the 19th century the estate deteriorated and the buildings were stripped, and in the 20th century the hall became a hotel. Between 1994 and 2010 Durham County Council carried out an admirable restoration of the park, supported by the Heritage Lottery Fund, and it can now be enjoyed by visitors once again.

The plain and undistinguished house, now Hardwick Hall Hotel, does not in the least prepare one for the fun that Burdon had in its grounds.  Although James Paine designed a grandiose mansion for him, it was never built. Instead, he created an unforgettable landscape designed to look completely natural, despite being heavily engineered. 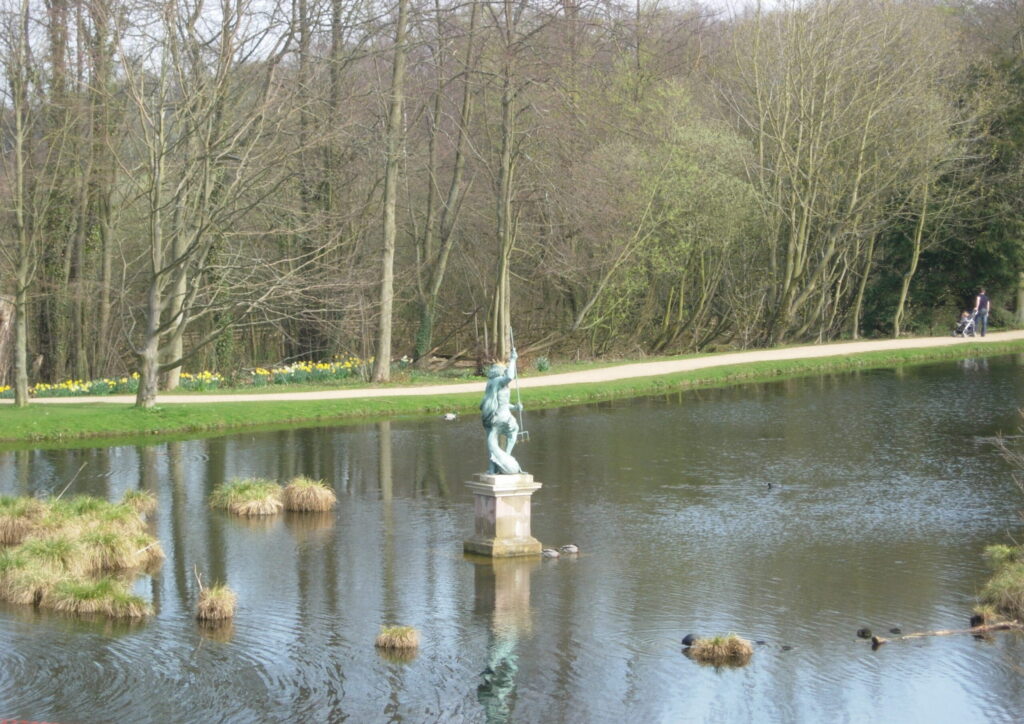 The parkland landscape Burdon began to lay out in 1750 covered about 200 acres, centred on a 17-acre lake in the valley below the house. A serpentine lake designed to look like a river followed its south and east banks, flowing into the main lake under a rustic bridge with a small cascade. Burdon commissioned architect James Paine to design the parkland buildings around 1754. They are thought to be the only such group of garden buildings designed by Paine.

The buildings served as vantage points or as eyecatchers in the view. The succession of buildings alternated stylistically, in Hutchinson’s words (1794), ‘to give the contrast between the polished taste of the present times [classical] and the rural ornaments which delighted our ancestors’ [Gothic]. Furthermore, in the design of the classical buildings there was a progression through the orders, from simple to ornate – Doric, Ionic, Corinthian.

In 1790, two years before he died, Burdon sold the estate to William Russell. Russell added a lot of planting to make the garden buildings less visible, and carried out landscaping in the East Park, including the extended avenue and a serpentine plantation. The estate then passed to the family of Viscount Boyne in 1828. As the family were not always in residence, the estate deteriorated and its buildings were stripped of fixtures and fittings. By the middle of the 19th century the lake had been drained and in 1953 the landscape was described as being in a state of ‘devastation’ and ‘disintegration’.

Walking around the landscape

The 18th-century visitor was encouraged to take an anticlockwise circuit around the landscape starting from Hardwick Hall (not to be confused with its namesake in Derbyshire). Visitors would enter from Sedgefield through the fields, which later became East Park, and the castellated Lodge gateway, to be received by the gardener on the long broad terrace below the house.

To the east of the terrace there are views to the tower of Sedgefield church, a mile away, and to the west one could originally see the Bath House, though only the foundations of this survive. Halfway along the Terrace is a Gothic seat, designed or built by 1753. It has an arcade of ogee arches and looks over a circular pond on the axis of the terrace.

Walking anticlockwise round the lake, one comes to the cascade and pond. Excavations of the cascade’s bed revealed shaped bricks, pierced tiles and stones, to ensure a loud rippling sound. In the 18th century, the visitor’s guide would have opened a sluice to increase the flow. 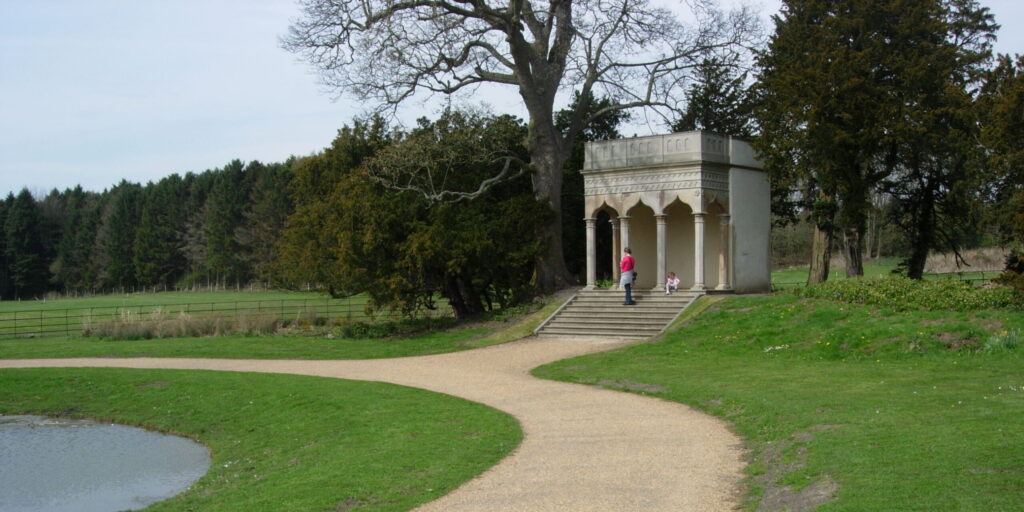 At the end of the Pond was the Bono Retiro, a Gothic retreat of which only the ruins of the W façade survive. The lost parts also had plain lancet openings, with quatrefoils in the end bays above. On entering, a large mirror on the back wall reflected the cascade. Stairs, flanked by classical busts, rose to a mock library, its walls painted with book spines. An early 19th century account (borrowing from a ballad by Robert Southey) described painted glass in the windows, depicting ‘the likeness of things so foul to behold, that what they are is not fit to be told’

The Temple of Minerva

In contrast to the oppressive setting of the Bono Retiro, the Temple of Minerva is set high, in broad open fields south of the lake, on a square mound with a ha-ha, and is the principal viewpoint in the park. Its dome, surmounted by an urn, sits on a plain octagonal drum, and that in turn rests on a cube (like that at Chiswick villa) with niched sides, inside and out, surrounded by an Ionic colonnade. Inside it now has plain walls, but originally there were allegorical paintings by Giuseppe Matia Borgnis and his son Giovanni, with plasterwork by Giuseppe Cortese, and busts of the Greek philosophers and English writers in the niches. 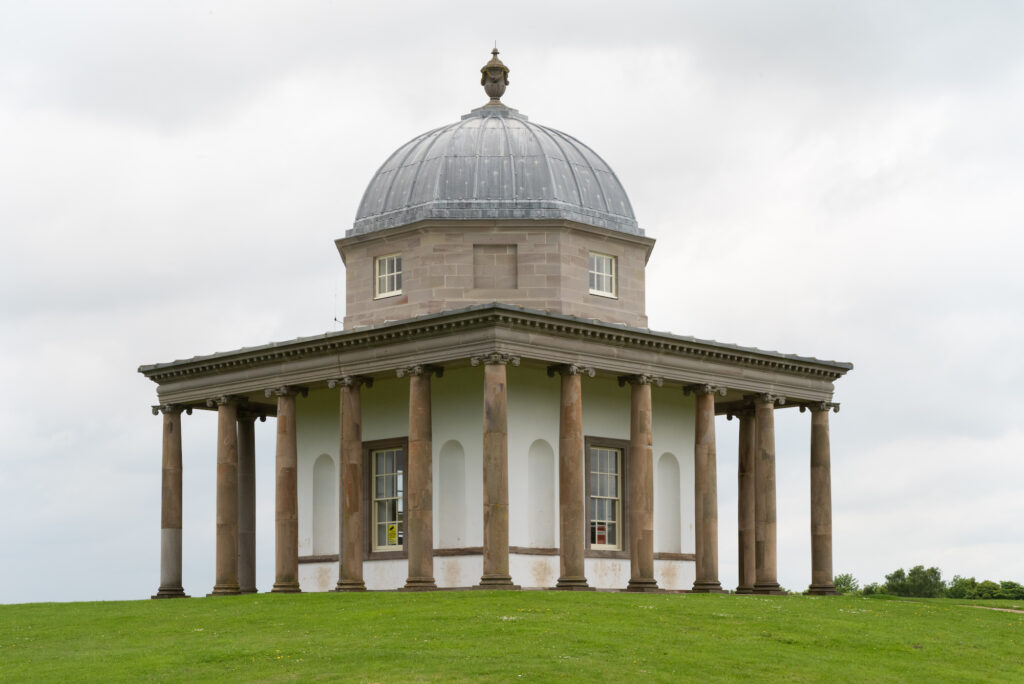 Temple of Minerva at Hardwick Park © Will Roberts

Now one walks into the woods to the south-east – once with a small diversion to a ‘stone seat in the rustic style’ flanked by busts – then over the river on Paine’s faintly Gothic serpentine bridge (c.1754). Probably the first elliptical-arched bridge in the country, according to Peter Leach, this was the first parkland building to be restored, in 1994. A little further along, on a small island, stands a statue of Neptune, replacing one of 1758 lost after the Second World War.

In the south-east corner of the park, set against woodland and with its open lawn to the river now reinstated, is the gothic ruin of c. 1764. An arched gatehouse, formerly with a room above it, and a tall circular prospect tower to one side, has now been restored to its full height. It incorporated medieval masonry from Gisborough Priory to add authenticity. A little further on, across the river, there was a grotto which was destroyed in 1974. 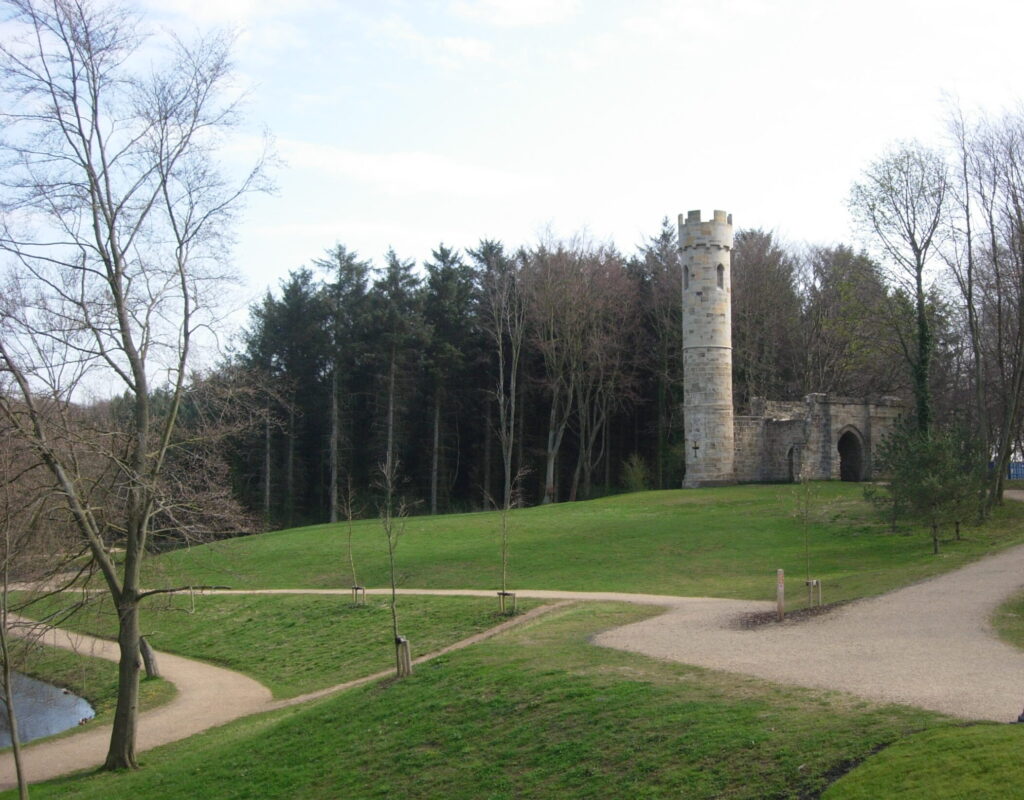 Returning, the visitor climbed through woodland towards the banqueting house, the grandest building in the park, but this was demolished in 1947. Only a few courses of stonework remain. Its three-bay façade, with Venetian windows, was based on part of a design for Whitehall Palace as shown in Kent’s Designs of Inigo Jones. Within was a double-cube room with elaborate plasterwork, a ceiling panel by Francis Hayman and plaster busts of poets and architects including Vitruvius, Palladio, and Inigo Jones. Over the fireplace was a portrait of John Burdon, 1779, by Martin Ferdinand Quadal,which was rediscovered and returned to the Hotel in 2016.

The park is now managed by Durham County Council and was registered at Grade II* in 1986. The council’s admirable restoration has repaired the buildings that remained standing, reinstated landscape features and re-created old vistas by felling trees, all set around the restored lake. A timber-clad visitor centre, designed by Sarah Hare of Hoger Hare, was added in 2008 and is a perfect foil to the historic landscape, understated and contemporary.

Martin Roberts
Based on his entry for Hardwick Hall in The Buildings of England: County Durham (Yale UP, 2021)

You can read more about Hardwick Park in two posts on the Gardens Trust blog: