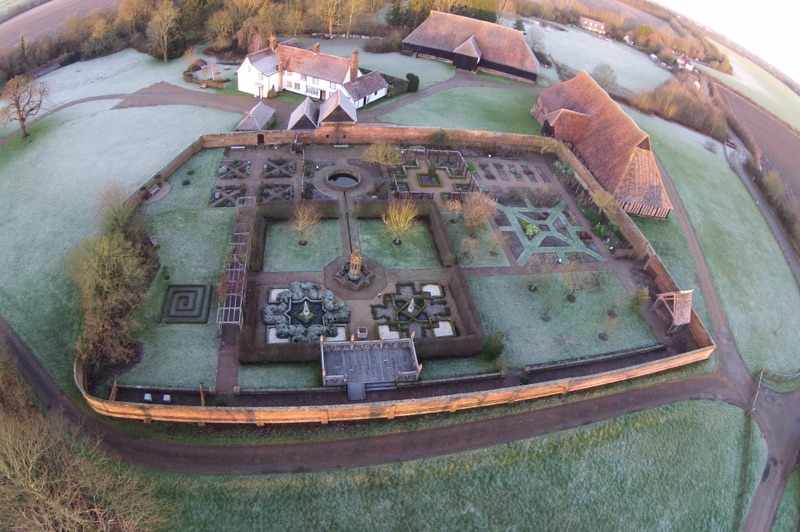 Cressing is situated in central Essex between the towns of Witham and Braintree.  The manor was given by Queen Matilda to the Knights Templar in 1137.  Their management of the 1000 acre home farm was so successful that they soon needed to build two new barns, which still survive. They are the oldest and finest 13th century barns in the country.  The manor later passed to the Knights Hospitaller, and then at the Reformation was bought by the Smyth family who built a brick mansion. By the 18th century, this had become redundant and was demolished.

When the estate was put up for sale in 1987, Essex County Council intervened to save the barns from conversion or worse, buying the farmstead on which they stand. With the barns came other buildings, including a Tudor brick walled garden, virtually all that was left of the great house. Given that the site was going to have to pay its way as a heritage attraction, Essex CC seized upon the opportunity to reinstate a Tudor garden within the listed walled framework. 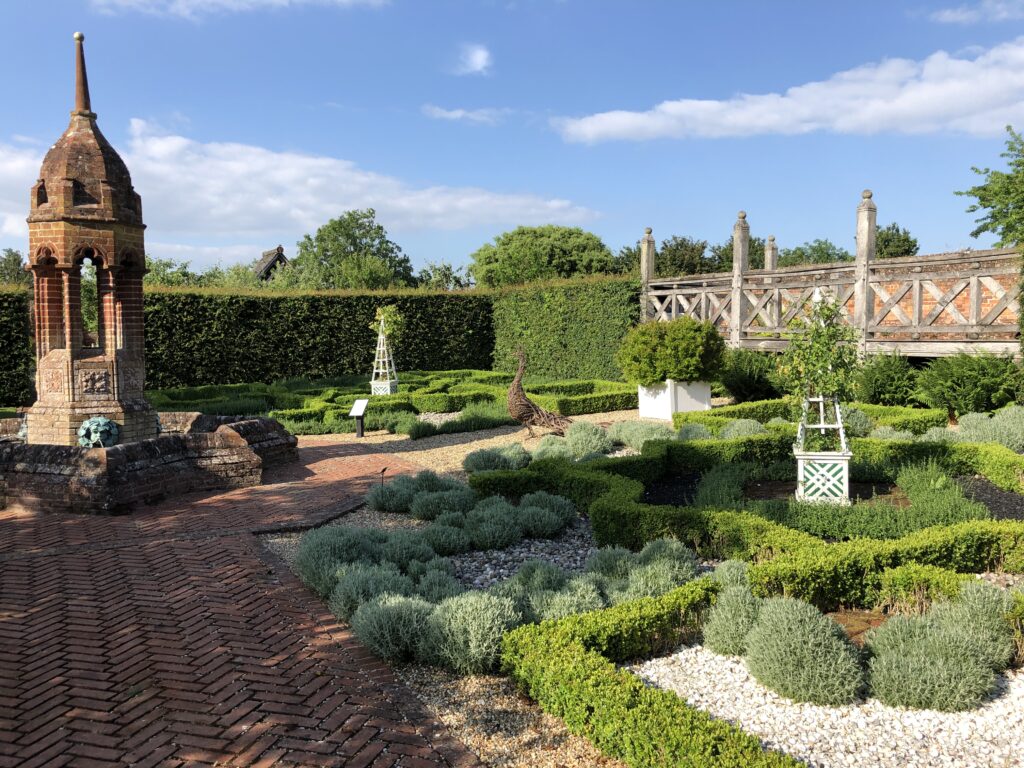 The fountain and knot garden at Cressing Temple © Rebecca Ashbey

The Tudor walled garden at Cressing Temple is unforgettable as the largest, most comprehensive collection of 16th century plants in the area. It is a garden to enjoy, soak up the atmosphere and reflect upon a time when growing plants and exploiting their many uses was an essential part of everyday living.

The walled garden had originally been a pleasure garden adjoining the rear of the mansion.  It would have been used for recreation, exercise and contemplation but also would have provided for the everyday needs of the household. When, after its demolition, the site was reduced to a tenanted farm, the walled garden became a kitchen garden to service the farmhouse. By 1987 it was neglected, with no old planting apart from a few fruit trees, some roses and vegetable beds.

A layout was designed by John Hunter, an architect, and Martin Wakelin, a landscape architect, inspired by research on Tudor gardens. Sandra Nicholson of Writtle College helped with planting advice.  The chosen plants were those commonly grown in gardens around 1600, and included in John Gerard’s The Generall Historie of Plantes published in 1597. They were either plants endemic to the British Isles or early introductions brought to these shores by travellers or early settlers.

Constructing the garden was a complex task, preceded by an archaeological investigation. The principal features are a viewing platform replicating a raised terrace for which evidence was found in the excavations, overlooking a knot garden. The knot garden is laid out with evergreen plants of varying shades of green, and infilled with charcoal, stone and sea shells for maximum contrast.  The formal centrepiece of the garden is a fountain and star shaped pool, a masterpiece in moulded brick made by Bulmer Brick and Tile at their works near Sudbury. Four spouts set in cast bronze heads represent the rivers of paradise. From the fountain a rill leads to a still pool covered with water lily.  The rest of the garden is divided by brick paths into compartments where can be seen herbs and plants used in a Tudor household. 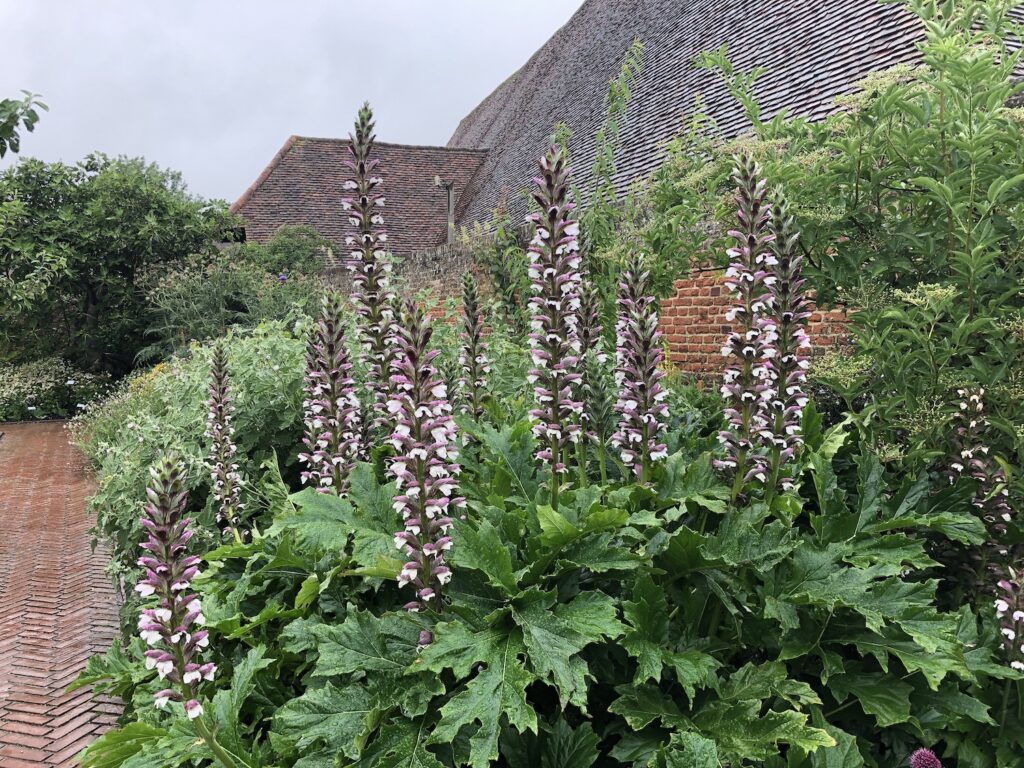 Each area represents plants for a specific purpose, whether culinary, medicinal, dyeing, cleaning, adornment or for ritual. In most cases their uses were many and variable. A path enclosed by an arbour overgrown with roses and hops separates the beds from a flowery mead on the south side of the garden, where a medlar and a mulberry grow against the old brick wall.

That was all in 1996.  Today the garden has evolved, with some changes to the planting scheme and replacement of trees as old ones have died, and the installation of a timber-framed gardener’s shelter or bothy made on traditional principles by the Carpenters Fellowship in 2008.  The horticulturalist is now supported by the Friends of Cressing Temple, set up in 2013 with a grant from the Essex Gardens Trust.  Their help has enabled the County to maintain the garden to a high standard and further develop the potential of the site. A Heritage Lottery grant in 2018 made it possible not just to replace the oak framed arbour, by then weak in the joints, but also funded a capacity building programme for the 30-40 volunteers who researched Tudor gardens and garden history, and produced new interpretative material and display boards. 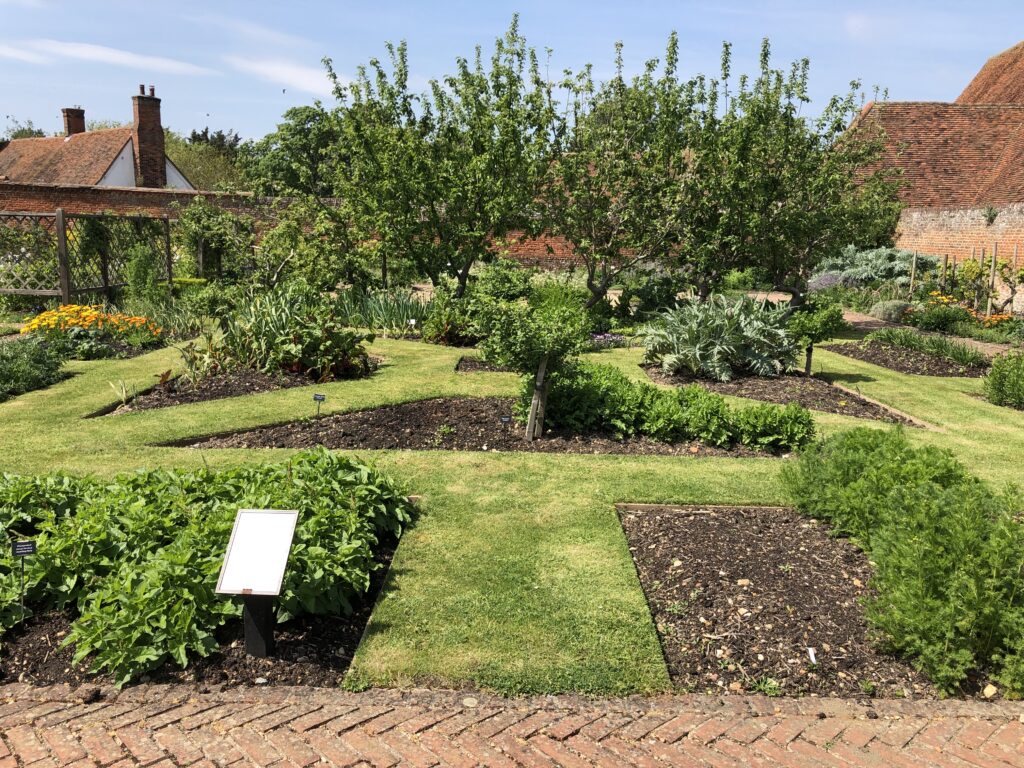 Other features at Cressing Temple

As well as the Tudor walled garden, there is a garden next to the farmhouse. This was initially created in the style of the garden designer Percy Cane who came from Braintree. In 1993, the Queen’s Jubilee was marked by planting an orchard of 40 traditional apple trees. Now that these are mature, apple days have become a feature of the calendar. In the last year, more apple trees have been planted with the assistance of the East of England Apples and Orchards group, so that Cressing Temple now has a complete heritage collection of all the apples varieties that come from Essex.  Another initiative is the Community Garden where the volunteers grow plants and produce which are sold to raise funds to support the gardens.

Essex Gardens Trust is celebrating its 25th anniversary; find out more on their website

Cressing Temple is open with admission free every day of the week (with the exception of special event weekends: see www.explore-essex.com). Wilkins and Sons Ltd manage the tearoom serving light lunches and cream teas. Picnics in the grounds are welcomed.