In early February 1907, Ella Christie stood on the platform at Dollar Station in Clackmannanshire, next to a large amount of luggage and her ladies maid, Miss Humphries, the two of them setting off on another global journey that would take them this time to the Far East. Having travelled by ocean going liner, Chinese junk, bullock cart, train and river boat through South East Asia, China and Korea they arrived in Japan in time for hanami or cherry blossom viewing. Miss Christie was captivated and determined to build a Japanese garden of her own in a corner of her estate outside Dollar.

The Unforgettable Japanese Garden at Cowden 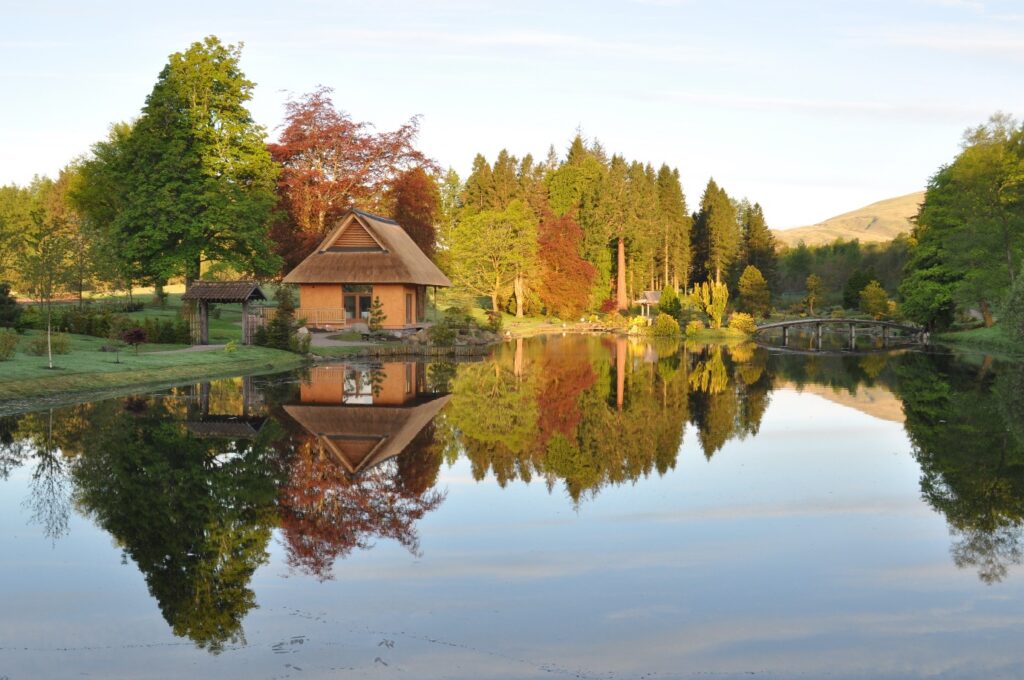 The lake of the Japanese Garden at Cowden, Photo © Lucy Stewart

The result was Sha-Raku-En, ‘the place of pleasure and delight’, a seven acre strolling garden built around a lake with many traditional features and making use of shakkei, the borrowing of the surrounding landscape, so the garden fits seamlessly beneath the Ochil hills and into the surrounding countryside.

Having returned to Scotland and using the contacts she had made while in Kyoto, Miss Christie engaged Taki Handa, a horticulture student at Studley College in Warwickshire, to design her garden. Taki made three visits north, once to plan the garden and twice more to oversee the works being undertaken by the estate workers. The boggy area was dammed, the lake dug out, the planting done so that by the time Taki left to return to Japan in October 1908 the garden only lacked the lanterns that were shipped over from Japan and finally put in place the next year. 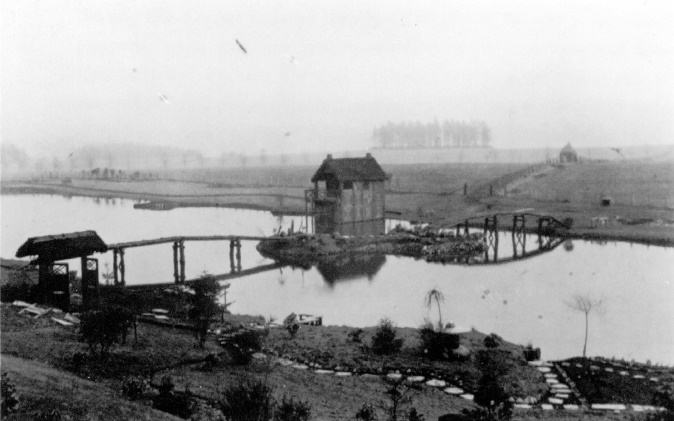 Around 1925 Miss Christie engaged Professor Jiju Suzuki, a Japanese garden designer based in London, to help prune the plants and to make  a couple of improvements, the main one being the replacement of the first curved bridge leading to the island with a zigzag yatsuhashi bridge which he felt was a crucial addition. Professor Suzuki also helped find a Japanese gardener, ShinsaburoMatsuo, who came to Cowden in 1927 and remained until his death in 1935. He is buried in nearby Muckhart cemetery. 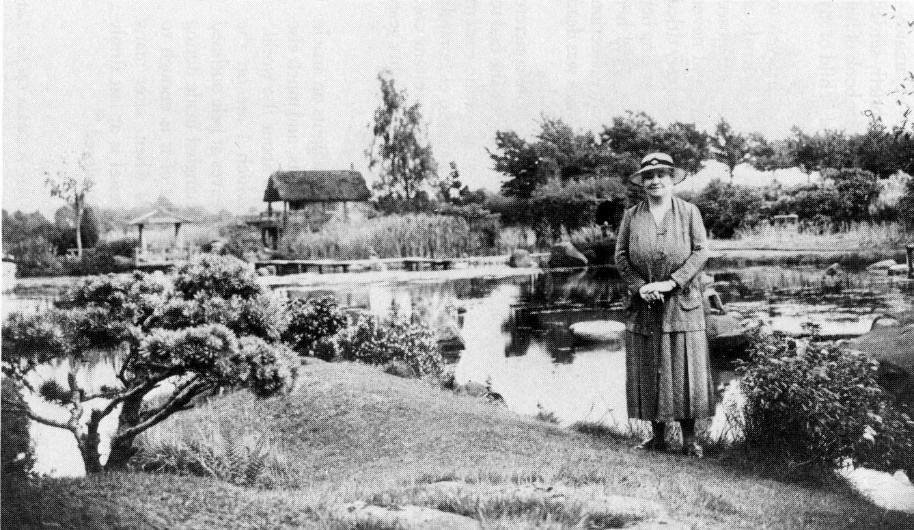 Miss Christie in her garden in 1935, Photo courtesy Cowden Garden

Miss Christie died in 1949 and the garden was inherited by her great nephew, Sir Robert Stewart. In 1963 the garden was vandalised, the lanterns pushed in to the lake and the tea house burned down, after which it languished and largely disappeared as the rhododendrons buried what was left of it.

In 2010 Sara Stewart, Miss Christie’s great, great niece began the restoration with the aid of Professor Masao Fukuhara of the Osaka University of Arts and gradually Sha-Raku-En has come back to life. 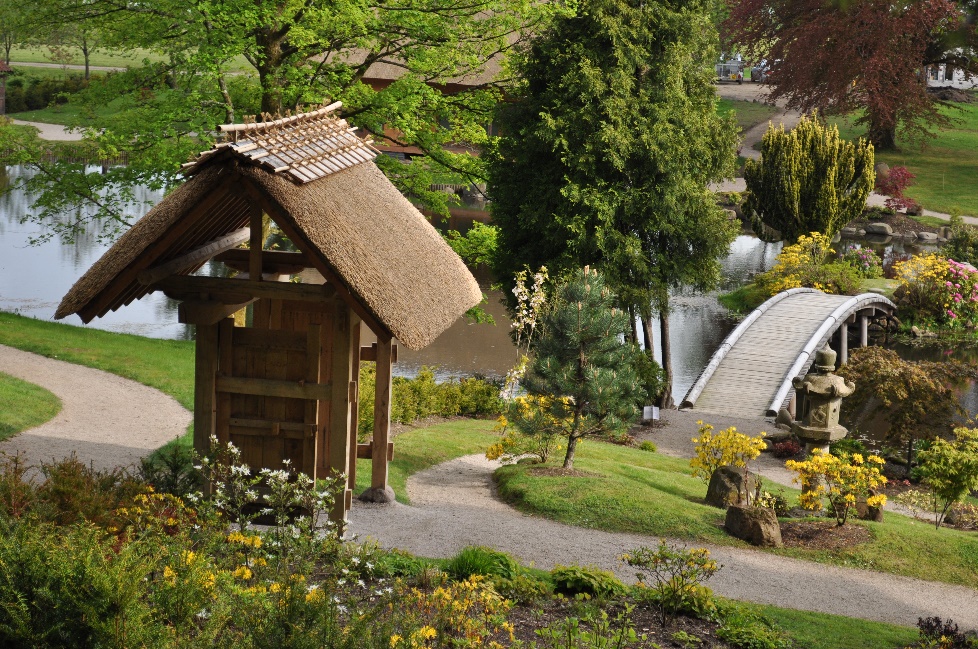 One of the unique features of Cowden is that it was created and maintained by Japanese people which makes it stand apart from other Japanese gardens in Britain. The restoration has been faithful to many of the features that Taki Handa put into her original design resulting in a very authentic experience for visitors.

There is a karesansui or dry garden where a careful arrangement of four moss covered islands float in a sea of raked gravel, the azumaya in the background, overlooking the lake from which the garden can be enjoyed in all weathers. There is a close similarity between the soils of Japan and Scotland so that Taki Handa was able to use many of the plants typically found in gardens in Japan though there are others which are not typical and were used to give a fusion of Scottish and Japanese culture. The paths meander through plantings of azaleas, irises, maples, pines, hydrangeas, and ferns all of which thrive here and given how damp the area is, the growth of naturally occurring mosses is heavy too. Moss is an important element in some Japanese gardens, particularly some of those in Kyoto which Miss Christie would have seen and Cowden offers a perfect place for that effect to be replicated.

Miss Christie was an enthusiastic collector of seeds and some of the larger trees have grown from seeds that she brought back. Others grew from seeds planted by Sir Robert Stewart that he gathered in California.

The Cowden Garden is now managed by a charitable trust, Cowden Castle SCIO, which is chaired by Sara Stewart and is open as a visitor attraction. The restoration still has a few more projects to be fulfilled and these will take place as and when funding is available. The full time gardener Rob Grindrod and  his assistant gardener keep Cowden in shape with the help of local volunteers and the garden is open all year so that visitors can appreciate another feature of a true Japanese garden; that it is not all about the planting but is about the bones of it, the structure that enables one to see beauty and spirit whatever the time of year.

The Japanese Garden at Cowden

Hear about other unforgettable Japanese gardens in the series of three talks starting on 1 December, arranged in conjunction with the Japanese Garden Society.