Easton is a classic rural estate, nestled in the rolling Lincolnshire countryside, a stone’s throw from Woolsthorpe where Isaac Newton was born. It was once held and farmed by the Cistercian Abbots of Vaudey, in an area described by the 18th century antiquarian, Dr William Stukeley as ‘the Montpelier of England’. Since 1561 it has been owned and managed by the Cholmeley family. The historic 12-acre gardens burst with vibrant colours, bulbs and flowers. Special highlights throughout the gardening year include snowdrops, a significant sweet pea collection, roses and meadows.

Twenty years after its revival, Easton’s walled gardens are among the finest in the UK, covering 12 acres of a beautiful valley watered by the upper reaches of the River Witham, just off the A1. They are an intrinsic part of the local community and thousands of people visit each year to enjoy the passing seasons, big open skies, swaying meadows and heady scent of sweet peas and roses. 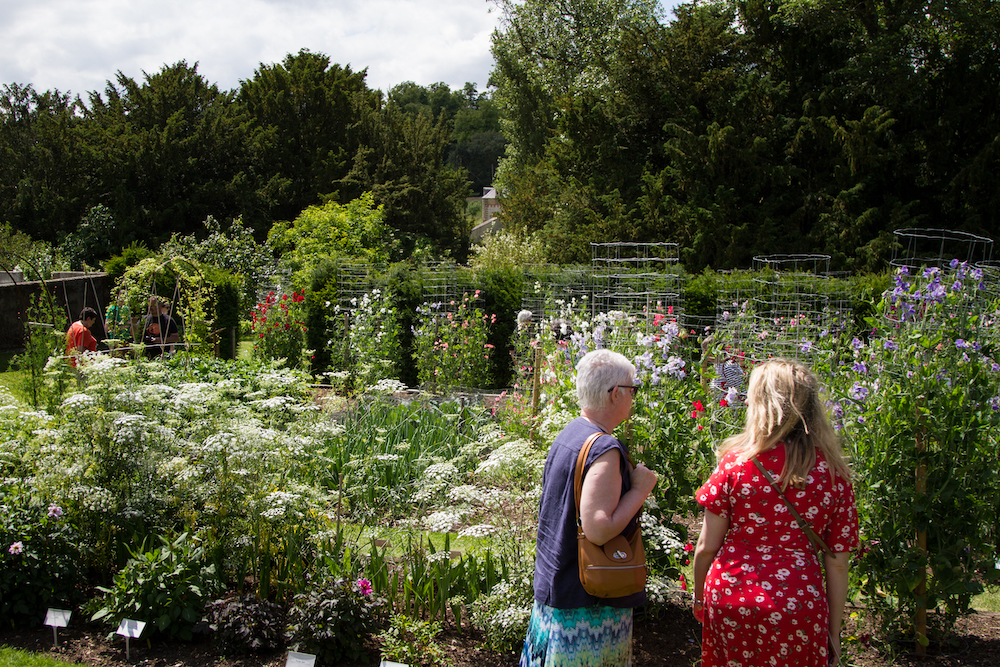 The story of Easton Walled Gardens and the Cholmeley Family begins 450 years ago. In 1592, at the end of the reign of Elizabeth I, Sir Henry Cholmeley bought the rather grand manor of Easton. In their original incarnation, the gardens were a series of walled enclosures framing the manor house. As eras passed, the gardens were modified, from the overlooked walled gardens favoured by the Tudors and Jacobeans, to Victorian designs that created borders, ornamental stonework and glasshouses.

The ancient conveyance for the property, written on parchment, mentions orchards, meadows and gardens. There are surviving walks and walls that are clearly created in the Tudor style, so the written and archaeological evidence means the gardens are at least 400 years old. Architect Anthony Salvin (1799-1881) is thought to have designed Tudor-style estate buildings including the Jacobean gatehouse (1841) and stables, each decorated with the Cholmeley crest, a sheaf of corn, carved in stone.

From where the old Hall  and grand Victorian conservatory once stood, seven dramatic terraces drop down to a huge expanse of lawn, then on to an ornamental bridge over the River Witham, which leads to the Rose Meadow, within the Walled Garden. The old Tudor enclosure, with its limestone walls contains Salvin’s four attractive ornamental lodges (c. 1836), including the ‘Apple Store’ and ‘Tool Tower’. Here the long yew tunnel carries a sense of history in every stone and branch. 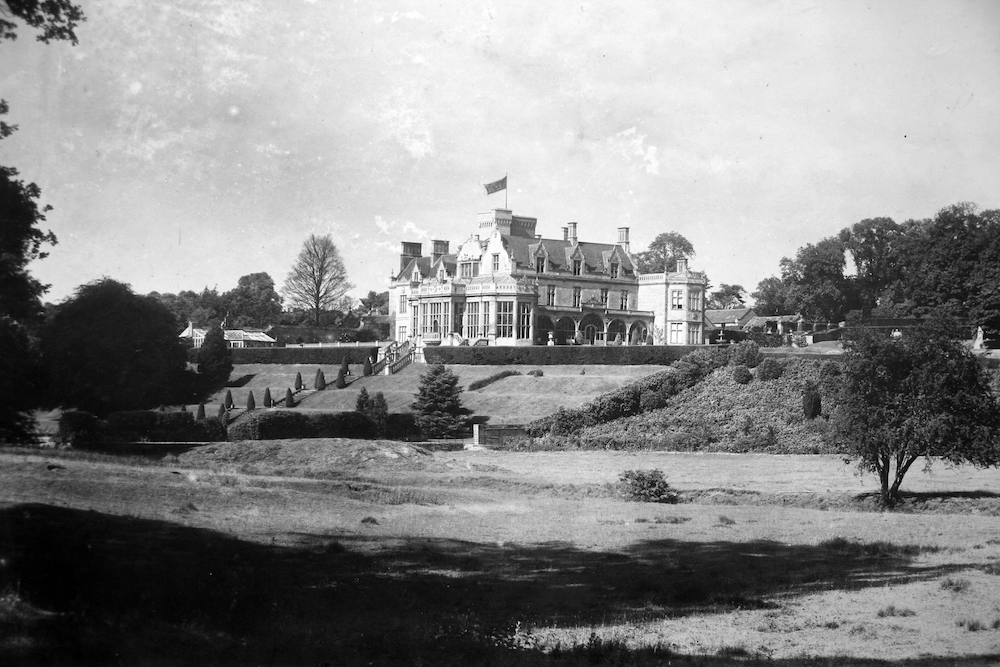 Easton in the 20th Century

At the beginning of the 20th century, the Estate was featured in the pages of Country Life magazine and received a visit from the former US president Franklin D Roosevelt on his honeymoon. His words about Easton still resound today: “A dream of Nirvana…almost too good to be true.”

The global events of that century left Easton permanently changed. The hall and grounds were a natural sanctuary for injured soldiers convalescing during World War I. Then, during World War II, the Estate was used as a barracks. The hall suffered irreparable damage both to the fabric of the building and to the remaining contents, including many family records. Home to the Cholmeley family for nearly 400 years, the Hall was demolished in 1951, and the estate was never to be a family home again. Easton Hall’s gardens had evolved over the centuries from stone enclosures around the medieval manor house to the melon pits, bedding and borders of the Victoria era. However, after the impact of two world wars, the wild had its way. Sycamore, elder, blackberry bushes and ragwort took over and grew in abundance – the whole site was enveloped, and any traces of the gardens hidden from view.

For years the garden stood untended and impenetrable. Most saw a sprawling knot of branches, thorns and self-sown trees too unwieldy to do battle with, but Ursula Cholmeley saw an invitation. 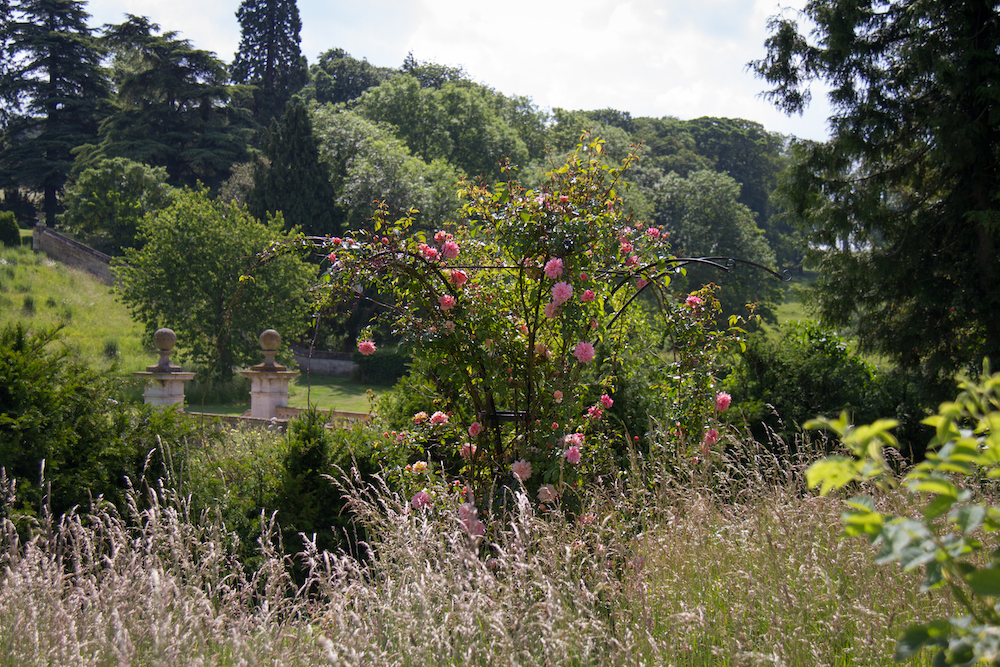 Drawing on a shared knowledge of gardening, love of a challenge, eagerness to grow, and influences near and far, Ursula recruited the Easton team of gardeners and they got stuck in. Ferocious brambles were tamed to allow rose gardens, borders, shrubberies, meadows and more to be created around the surviving – once neatly trimmed and now wild and darkly mysterious – yew tunnel on the main axis. As the gardens grew, so too did the possibilities, such as a ‘Pickery’, thanks to Ursula’s determined and creative vision and leadership. Decades later, and through endless hard work and discovery, Easton Walled Gardens has been nurtured back to life, a place for everyone to enjoy.

Careful restoration and transformation by a dedicated team of people, supported by the ‘Friends of Easton Walled Gardens‘, has brought this significant, historic Grade II-listed Park and Garden back to life, for the community and the local environment.

Carpets of snowdrops under magnificent veteran trees welcome visitors in February, the beginning of the open season. The two acres of meadows hold wild orchids and 20,000 bulbs flourish in spring, including some heritage narcissi, which re-appeared as if by magic following the clearance of the dense undergrowth. The gardens attract a wealth of wildlife. Birds that can be seen at the garden through the year include skylarks, blackcaps, little egrets, kingfishers, grey wagtails, wrens, red kites and buzzards. Over two hundred rose bushes bloom throughout the summer and over fifty varieties of sweet peas in late June and early July. With the help of a shared Lincolnshire Gardens Trust grant, two orchards have now been planted. 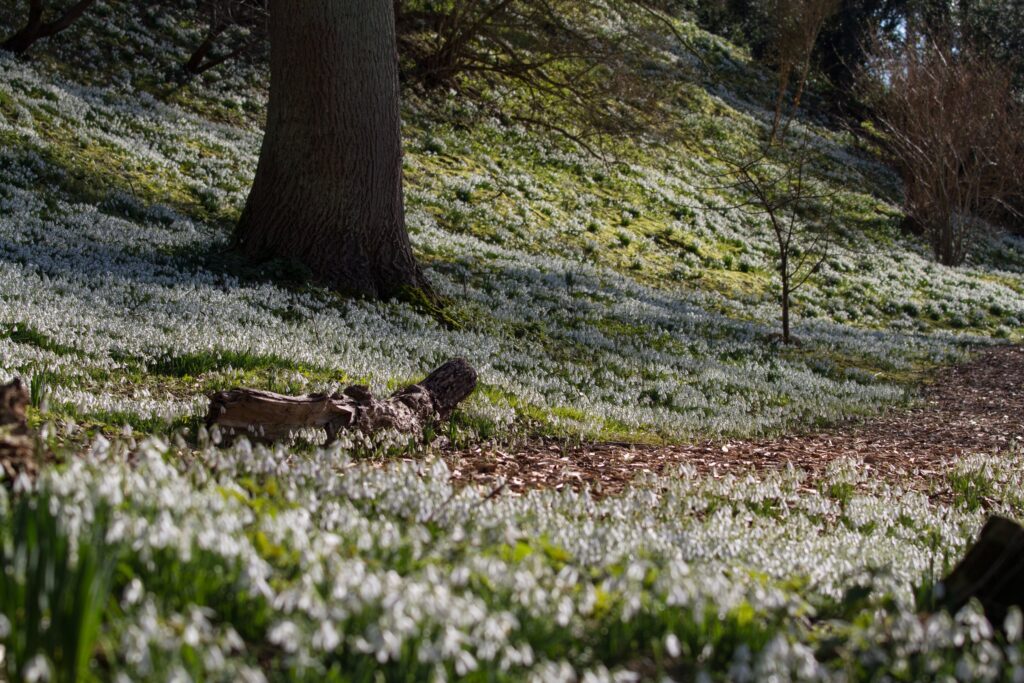 Designed to make the most of dappled sunlight, the planting of the Woodland Walk includes hellebores, aquilegia, hyacinths, and epimediums, as well as the famous snowdrops. The spectacular long borders and bright planting of the ‘Velvet Border’ contrast with the romantic cottage garden, which is on a more domestic scale. The vegetable garden has beds lined with green oak sleepers and grows everything from garlic, rhubarb, asparagus and leeks in winter to courgettes, runner beans, strawberries and squash as the year goes on.